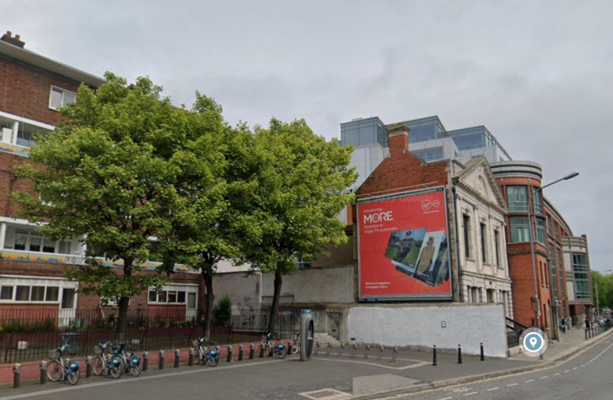 DEVELOPMENT PERMISSION FOR a new digital billboard on Kevin Street Lower in Dublin, next to social flats described by the architects as ‘poor architecture’, has been refused.

The request was made by JCDecaux, with a declaration of conservation method drawn up by Anello Architectes on behalf of the advertising agency.

A similar digital signage is located nearby at the corner of Wexford Street.

Sinn Féin Senator Lynn Boylan has submitted a planning submission defending the Bishop Street Flats, first built in the 1960s, which are located next to the proposed billboard site.

The council flats near the new Kevin Street Garda railway station are unique to most council blocks of the period in being adorned with bands of mosaics placed along the exterior walls of the balcony level.
Churches, trains, mountains and lamps, as well as local landmarks are included in the designs.

A Dublin Inquirer article about the design says the Dublin City Council Heritage Office has no information on who actually created the mosaics.

The conservation town planning report produced by the architects in support of the town planning application described the “poor architectural quality of the company apartments”.

No regular replacement of posters would eliminate the “stress” caused by the process of changing and gluing displays, according to the report.

In its submission, Boylan said Anello Architects argues that replacing the current billboard with a digital one will have a positive impact on “urban presence”. [of the protected structure at number 40 Kevin St] because it “will take it further away from the adjoining gable rhythm of the poor quality architecture of HLMs dating from the last century”.

“As the development plan notes, ‘high quality architecture from all eras combines with a strongly defined urban form of streets, squares and spaces to create a vibrant metropolis with a very particular sense of place.’ This is particularly the case for Kevin St. Replacing the display panel with a digital panel would have a negative impact on the urban presence.

Dublin City Council rejected the application, saying the illuminated digital signage proposal “would have a significant negative impact on adjacent residential amenities, cause visual clutter and have a negative visual impact on the character of the street”.

In its decision, council considered that increasing the brightness of signage, the frequency of advertising changes represents an intensification of use on the site and would have a significant negative impact on adjacent residential amenities.

He added that the proposed LED advertising structure, due to its excessive scale and proportions, its appearance and its location on the facade of this protected structure, would have a negative visual impact on the special architectural character and readability. of the building and would seriously damage its particular architectural character and its legibility. both the protected structure on which it would be mounted.