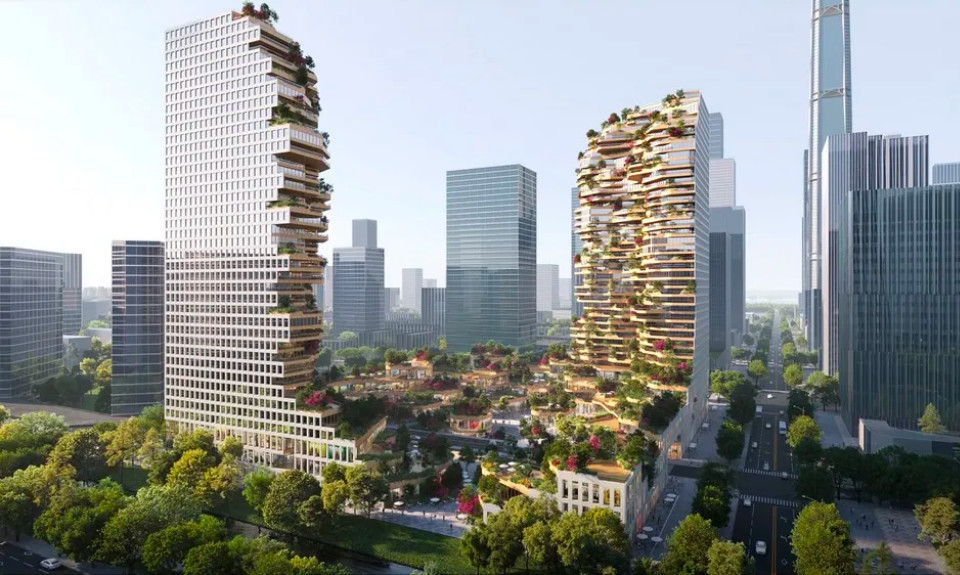 Architecture in Nanjing Screams, “Why don’t you finish it?”

Nanjing has a crisp architecture. The best in China, we say; be it the Republican-era charms of old embassies or the modernities of space travel. Soon though, we’ll have another contender who really takes the biscuit.

This Monday, June 15, news emerged that the winner had been chosen in an international competition to design a mixed-use, residential and commercial development for our city’s Jiangbei New Area.

And that’s because the competition’s winning entry, by Rotterdam, Netherlands-based architects MVRDV, is no less than 166,000 square meters.

It’s called the Oasis Towers. But let’s be honest; it looks nothing like a palm tree planted on a pile of sand. More like something dystopian from “Bladerunner”, but with better lighting. “Planet of the Apes” could also be viewed.

But the name becomes a little more appropriate when we learn that the exciting project is intended to be a “safe haven” for residents of Jiangbei New Area, where the pace of development, even by Chinese standards, is on steroids.

The most eye-catching part of the design is undoubtedly the two 150-meter-tall “L”-shaped towers, which are carved out to provide Grand Canyon-style cliffs that slope down to a park and shopping center below.

According to a report by E-Architect, “Dotted with trees and other greenery, the oasis forms a verdant landscape on the building’s cascading terraces, a lush environment for shopping on the building’s commercial floors on the ground floor. floor to third floor”.

MVRDV founding partner Winy Maas is quoted as saying, “Nanjing’s contemporary architecture is inspired by nature in its form and appearance. … With Oasis Towers, we wanted to push this trend to the limit, not only by mimicking nature with curved, layered ‘cliffs’, but also by literally incorporating nature into the design with greenery and tapping into natural processes.”

So yes, the Oasis will also be an ultra-green building. Balconies will be clad in recycled bamboo and biodiversity will be maximized by planting a variety of species on inaccessible roofs. A gray water recycling system is also on display, to which two 500 square meter reed beds will contribute to naturally filter and clean water from showers, baths and washing machines. Energy consumption is also to be further reduced by a water source heat pump using an adjacent small river.

As seen in a computer-rendered animation of the towers posted on YouTube, the development stands out in stark and stunning contrast to the smooth, shiny skyscrapers that surround it. If the video is to be believed, the local population will surely urgently need some kind of oasis.

One thing is certain. The Oasis Towers are sure to be Nanjing’s most distinctive piece of real estate, for better or worse (despite our tone, The Nanjinger thinks it’s genius). Then… we just have to wait for them to finish.

New schools for Wellingborough as construction kicks off