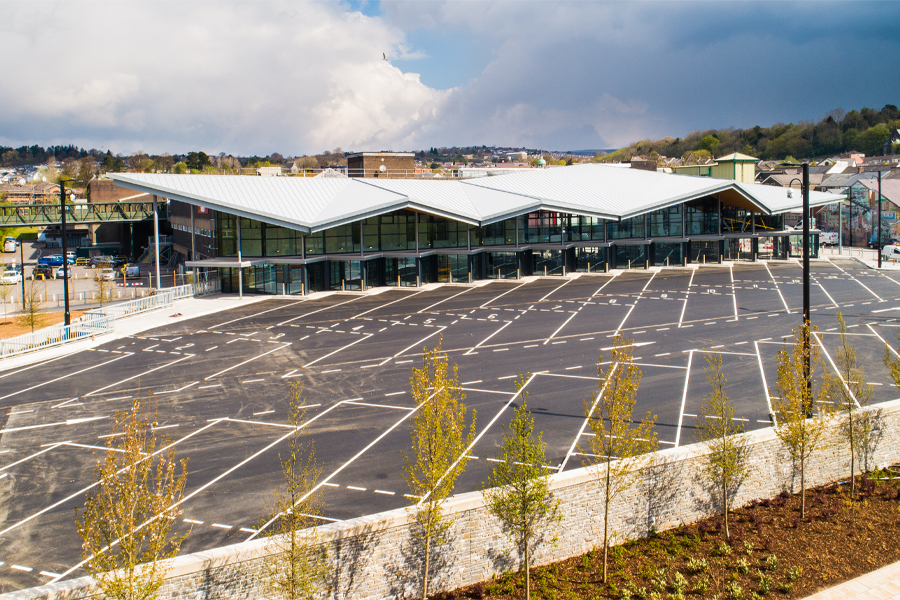 One of the busiest bus stations in Wales had seen better days. Built in the 1960s, it was dilapidated, fell well below Equality Act standards and had become a hotbed of anti-social behaviour. Merthyr Tydfil County Borough Council (MTCBC) envisioned a new state-of-the-art facility next to the station that would be a modern, high-quality transportation hub.

The team created an iconic 14-bay bus interchange to reflect both heritage and the future. Funded in part by a Welsh Government initiative to make public transport electric by 2028, MTCBC has placed social value and sustainability at the heart of the project.

Bluebeam allowed the team to communicate five times faster. Tasks that usually took a week only took a day. Bluebeam was part of both companies’ standard toolkit. The whole team, including many subcontractors, therefore used it throughout the project. This made change management easier, as there was a single source of the most up-to-date information at all times.

The flexibility of Bluebeam’s design review, quantity, and estimating tools made it easier for the team to adapt to this change. The quantity and estimate processes were at least 80% faster, Morgan Sindall said.

Benefits of Bluebeam on a recent building project in Wales

Staying on the same page in the face of disruption and change is a crucial part of any construction project. Spanning over six years, the Merthyr Tydfil bus swap plans have arguably changed more than most.

The clarity and simplicity of Bluebeam allowed this team to thrive. It operated more efficiently and opted for collaboration rather than confrontation. This meant that the team was striving to exceed the expectations of the brief, making choices that would benefit both the local economy and the environment.

When the project started in 2015, sustainability principles were not a key feature of the brief. But halfway through the project, the Welsh government set ambitious targets for the electrification of public transport by 2028.

MTCBC’s new sustainable vision has changed the energy performance certificate from a D to a B. All parties, including contractors and subcontractors, have come together to pursue this goal and motivate each other. The result is a transport interchange that is 100% fossil-free and fit for the 21st century.

To minimize transport to the site, the team sourced materials from nearby, although they were expensive. The team also went a step further by employing local suppliers and artisans to better benefit the local economy and the people who worked and lived in the area. Over 95% of the supply chain companies used in the construction phase were based within 25 miles of the site.

Bluebeam’s design review really came into its own. This allowed project partners to annotate and collaborate on the same documents in real time or remotely, meaning the team was able to better communicate project data, with personalized and in-depth annotations.

The team found that design review and markups simplified and accelerated the review process, allowing teams to overlay plans and clearly compare, communicate and document changes.

“Historically, you’d scribble on a drawing and try to scan it, or make annotations in Paint,” Williams said. “He gets lost in translation.”

The new sustainable bus interchange is a remarkable and functional building well suited to the modern world. Evans said “his successful delivery to such a high specification is a game-changer for Merthyr Tydfil”. So far, community feedback has been fantastic, even with the challenge of increasing public transport use during the pandemic.