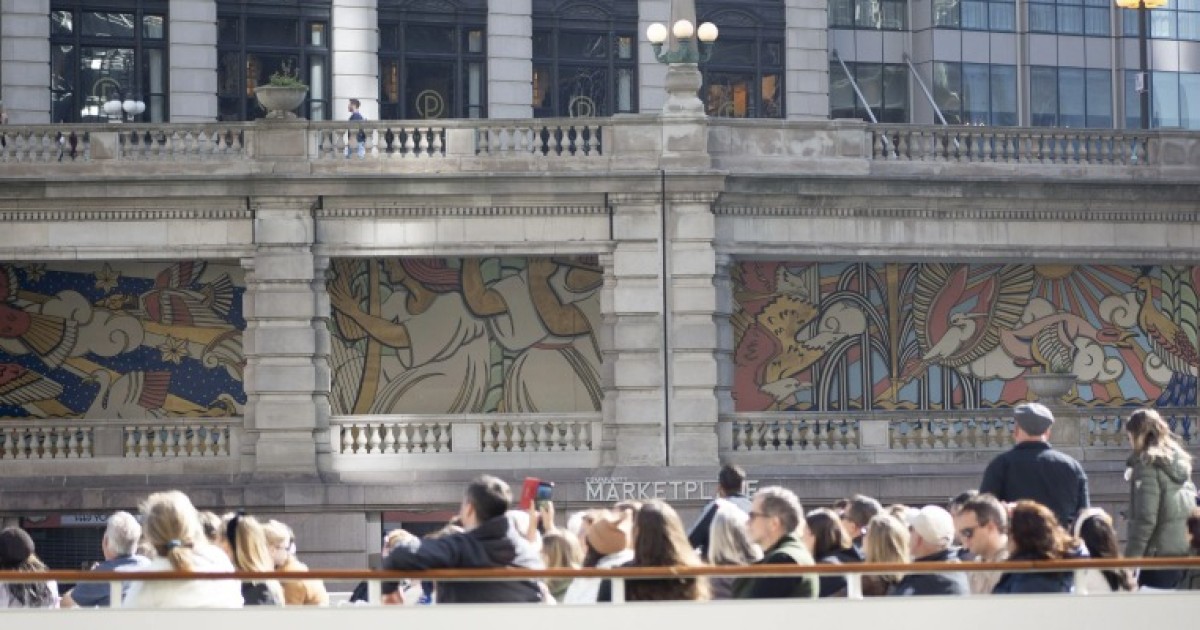 While researching for a mural she planned to paint to celebrate Chicago’s iconic buildings, Kate Lewis took a series of architectural tours.

Now, the mural she created on the Riverwalk between Wabash and Michigan avenues is itself the focus of tour groups.

She called it “The Radiance of Being” and drew inspiration from more than a dozen historic structures with Art Deco elements, including The Rookery, Merchandise Mart, Palmer House, Palmolive Building, and Chicago. Motor Club. building.

Completed in 2020, the mural spans 180 feet and is accented with shimmering gold paint that reflects off the water.

“I wanted to keep that Art Deco feeling and kind of pay homage to those architects of the 1920s,” Lewis says of a clean architectural style that emerged a century ago.

“Architecture looked so much better in my mind when people paid more attention to nuance,” says Lewis, 34. “With decorative patterns and ornaments.”

Part of the mural shows white-robed musicians playing flutes and harps – inspired by images carved into the front of the former Chicago Musicians’ Federation building, 175 W. Washington St., built in 1933 and enlarged later.

Lewis says she tried to mold the musicians “in a way that felt like they were playing against each other.”

Another part of the mural features images of hawk-like birds – inspired by the carvings on the bronze elevator doors at The Rookery, 209 S. LaSalle St.

The building was designed by famed Chicago architects Daniel Burnham and John Wellborn Root and opened in 1888. Architect William Drummond added Art Deco touches to the interior in 1931 with the intricate designs of the elevators, between other changes.

The mural also features a fountain and birds, including a crane, which Lewis says were inspired by the ornamentation of the 94-year-old Chicago Motor Club building, 68 E. Wacker Pl.

The mural was commissioned by the Chicago Department of Cultural Affairs and Special Events.

Lewis was born and raised in Florida. She says she gravitates “to those sun-stained color palettes because of what I’m used to in Florida. It’s cozy and warm for me to have these pastel palettes.

Lewis says a friend suggested naming the mural “The Radiance of Being”, which she said “felt like a perfect representation of how I felt looking at it”.

After living in Logan Square for seven years, Lewis says she wants to be closer to her family and is moving back to Florida. But she won’t forget Chicago.

“To be able to be part of such a big project in the city that developed me, I can’t even express how amazing it is,” she says. “It’s a real fulfillment of life.