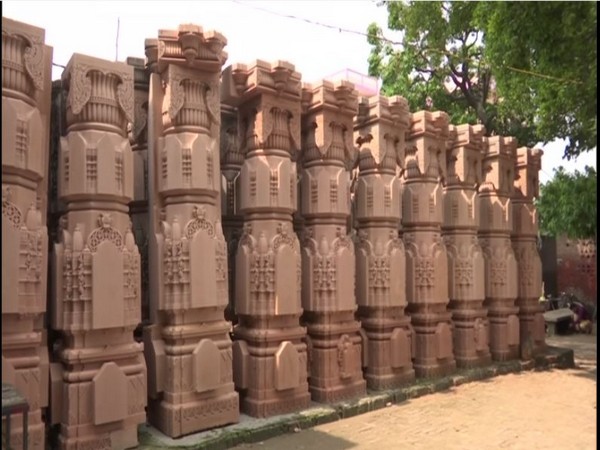 Construction work on the Ram Mandir began on August 5, 2020, with the laying of the foundation stone by Prime Minister Narendra Modi.

Shri Ram Janmabhoomi Teerth Kshetra (SRJBTK), the authority in charge of Ram Mandir operations and supervising the construction of the temple shared the progress report today.

According to the report, the foundations have been laid and work to raise the base or pedestal, which began on January 24 this year, is still ongoing. By December 2023, the sanctum sanctorum of the temple which will have the idol of Ram Lalla, would be ready for worship.

“The plinth is raised using granite stone blocks from Karnataka and Telangana. Installation of carved sandstone around the sanctum sanctorum will also begin soon. The Mandir will be constructed from pink sandstone sourced from the hills of the region of Bansi-Paharpur in Bharatpur district of Rajasthan. Around 17,000 granite blocks will be used in the plinth works,” said Shri Ram Janmbhoomi Teerth Kshetra Trust.

By December 2023, the temple’s lower tier, which will house the sanctum sanctorum and an idol of Ram Lalla, will be ready for worship, the temple authority added.

White marble from the Makrana Hills of Rajasthan will be used in the Sanctum Sanctorum (Garbhgrih) of Mandir. “Part of the Makrana white marble is in full development and some of these carved marbles have started to reach Ayodhya,” the temple authority added.

According to the Trust, usually monthly, the construction committee, along with the engineers and architects, meets for two to three days under the chairmanship of former IAS Nripendra Mishra and discusses every detail very thoroughly. CB Sampura is the architect of the temple nad Parkota while Jay Kaktikar is the architect of the rest of the area, the Mandir authority has informed.

Larsen & Toubro is the main contractor for the construction of the temple and ramparts, while Tata Consulting Engineers has been engaged as the project management consultant.

According to the trust, devotees will be able to come to the temple to offer prayers from December 2023. Construction work on the temple will continue and be completed by 2025. (ANI)

This report is generated automatically from the ANI news service. ThePrint declines all responsibility for its content.