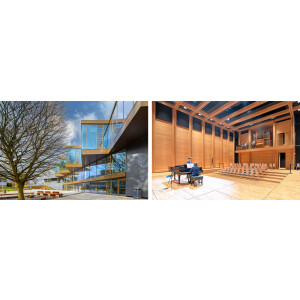 Double success for Gleeds at the Scottish Design Awards

International property and construction consultancy Gleeds celebrated after two projects on which it acted as gong project manager in the architecture category at the Scottish Design Awards.

The Scottish Design Awards have celebrated cutting-edge work, best practice, sustainability and innovation in architecture and design for 25 years. After a two-year hiatus from in-person events, they have decided to honor the ‘best of the best’ at this year’s anniversary dinner, dedicated to spotlighting outstanding talent and projects from across Scotland.

The sustainably designed Laidlaw Music Center at the University of St Andrews won the award for Best Public Building, while the £23million Central Campus development was named Best Education Project.

The £12.5million Laidlaw scheme is the first building dedicated to music in the university’s 600-year history and includes one of the world’s first chamber halls with a movable floor and a chamber of 9 m reverberation.

Meanwhile, Campus Central is the inspiring new home of the University of Stirling’s Student Services Centre, the Macrobert Arts Center ticket office, the Institute for Advanced Studies and a host of flexible spaces for the student community.

Two other Gleeds projects were also nominated but narrowly missed the awards: the HALO Enterprise & Innovation Center for the HALO Urban Regeneration Company on which Gleeds acted as cost manager was shortlisted in the regeneration category, while the historic building Gladstone’s Land for the National Trust Scotland, on which the Gleeds Buildings Survey team was nominated, was in the running for best interior design project in the interiors category.

Scott Ewing, Regional Director for Scotland at Gleeds, said: “I was incredibly proud to see no less than four Gleeds projects nominated for this year’s Scottish Design Awards, and of course delighted that Campus Central and Laidlaw Music Hall have recognized as best in class in their respective categories.

“These awards recognize the stunning designs of architects PagePark and Flanagan Lawrence, and the team at Gleeds are thrilled to have played a part in bringing their visions to fruition.

“We are fortunate to be working on some fantastic projects here in Scotland, and I’m sure we can celebrate many more successes in the years to come.”