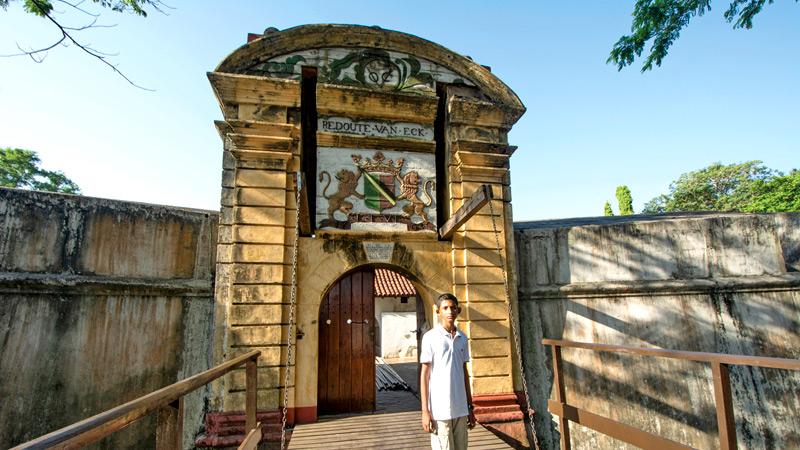 The easiest way to get to Matara is to take the southern highway. The new road significantly shortens the driving time from six and a half hours to one and a half hours. The highway runs inland away from the scenic coastal road known as the Galle Road which connects Colombo to the southern towns of Hikkaduwa, Galle and Matara.

We drove south on the southern highway last month, visited several fascinating places during our three-day trip, and finally to Matara, where the southern highway ended and the new extension began from the railway line to Kataragama, is a lively area. city ​​whose main streets are like a canyon formed by shops, offices and banks in structured concrete.

A quaint little Dutch town with extraordinary colonial and contemporary architecture, Matara is the gateway to Ruhuna – one of the best known and most fascinating regions of Sri Lanka. This southern territory was a cradle of Sinhalese civilization, where self-governing kingdoms flourished for centuries before Portuguese, Dutch and British assaults. Indeed, the South was blessed with many of its heroes, including the warrior champion King Dutugemunu, who in 161 BC. AD united the country for the first time.

The Dutch were the second of three European powers whose presence had far-reaching effects on Sri Lankan life and culture. Dutch involvement began in 1602 when Admiral Joris van Spilbergen landed on the east coast of the island near Batticaloa and traveled inland to meet with the King of Kandy to promote trade in the famous cinnamon, pepper and other spices, elephants and pearls. 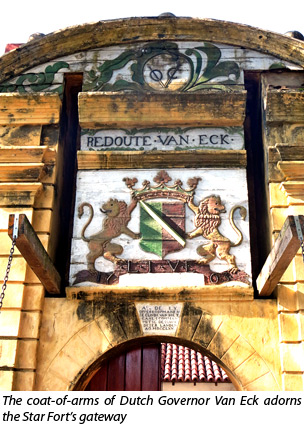 By the mid-17th century the Dutch had driven the Portuguese from the coastal regions of the island and the Dutch East India Company VOC (Vereenigde Oost-Indische Compagnie) ruled until the arrival of the British in 1796.

In the middle of the booming city of Matara is the Dutch-built Star Fort and another old Dutch building that resembles a medieval building from England with its tiled and sloping roof, three small conical towers and its gabled entrance that once housed the town’s market, known as the Old Dutch Trade Center – Nupe Market, where our destination was located, in the heart of Matara.

Under the heat of the scorching rays of the sun, we strolled through the narrow streets, delighted by the marvelous and unknown sights that unfolded before us. Pedestrians hurried past, absorbed in their own world, closing their eyes to us. However, for us the Star Fort and the Old Dutch Trade Center (Nupe Market) with its glorious history and ancient structures were sights to see. 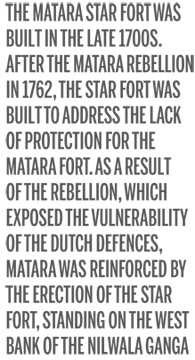 Little remains of the Matara fort except for the arch and part of its walls separating the old section of Matara. This fort built in the Netherlands now houses various government buildings. But the highlight of the attraction had to be the Star Fort which sits a bit apart from the Matara Fort, a small pentagonal structure well maintained by the Department of Archeology.

The Star Fort got its name from its shape as it was built in the shape of a six-pointed star. It is believed that construction work on the structure began around 1763 and was completed in 1765 by Baron van Eck, the Dutch governor who invaded the Kingdom of Kandy in 1765. The Star Fort was used to house a small garrison of Dutch troops. The Star Fort was the last major defensive work built by the VOC in Sri Lanka. In 1796 the Star Fort fell to the British and during this period the fort was maintained as a residence for British government officials. 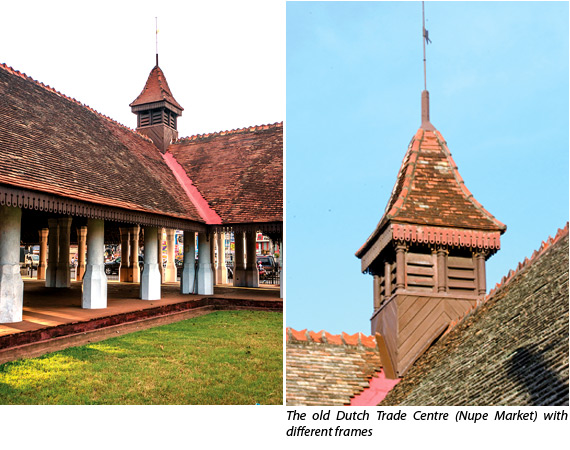 The attractive gate is still preserved and is a magnificent example of Dutch colonial architecture. A semi-circular “frame” adorned with the initials VOC forms the upper part of the arcade, which is supported on each side by two square pillars. Subtitled in the center, the name of the fort, Redoute van Eck. Immediately below there is a plaque with van Eck’s elegant coat of arms, flanked by two lions that adorn the entrance gate to the Star Fort.

All the compartments of the fort are intact: where the soldiers slept, the windowless rooms of the prisoners, a deep well dug inside the fort and the ramparts with their gunboats. The moat surrounding the Fort has been renovated and now filled with water and a drawbridge has been installed at the entrance.

In 1980, the Fort was taken over by the Department of Archaeology. Today, the Star Fort is attracted by local and foreign visitors and is now used as the Archaeological Museum of Matara.

Returning to the city center, we finally reached the Old Dutch Mall (Nupe Market), a T-shaped structure located in the busy Wilmot Balasuriya Mawatha (Nupe Junction) across the Matara – Akuressa road. The impressive heritage building of Nupe Market caught our eye and we were overwhelmed. Since it is a prominent landmark in Matara today, the building looks like something out of a typical medieval country house in England.

The origin of the building is somewhat debatable. Some historians claim that it was built around 1775 by the Dutch and is one of the oldest surviving Dutch buildings.

The notice board erected by the Department of Archeology at the site also mentions it as an old Dutch trading center. Others claim it was built in the early British period. Maybe the Brits renovated an old building.

However, one of the building’s most interesting architectural features is the use of Kandyan period tiles from “Peti Ulu” in its roof construction. Open on all sides, the wooden framework supporting the clay tiled roof is elaborate and lined with lavish latticework. These wooden frames supported by massive ornate whitewashed columns are typical of the British period. The floor decorated with plain brownish rough floor tiles is T-shaped with the top bars of the T facing the road and pointing towards the entrance. Archaeologists believe that one wing would have been intended for the vegetable market, and the other for meat and fish.

Going deeper into the structure, we came across many ancient columns. Between these columns once stood the large market which belonged to Dutch merchants who were doing a flourishing business. Over the years since British times, this spacious and fascinating Nupe market has fallen into disrepair. In 1980, when the Department of Archeology took over the restoration functions of the building, part of it had collapsed due to neglect.

Nupe Market is now empty but not abandoned – there is a small kiosk selling books on Sri Lankan heritage by the Department of Archeology who run their office in a corner of a separate building on the market premises and preserves it as the Dutch Heritage Monument in the country by the Department. The Dutch heritage of Star Fort and the magnificent edifice of Nupe Market are fascinating sites to discover in the country.

“Building material of the future”