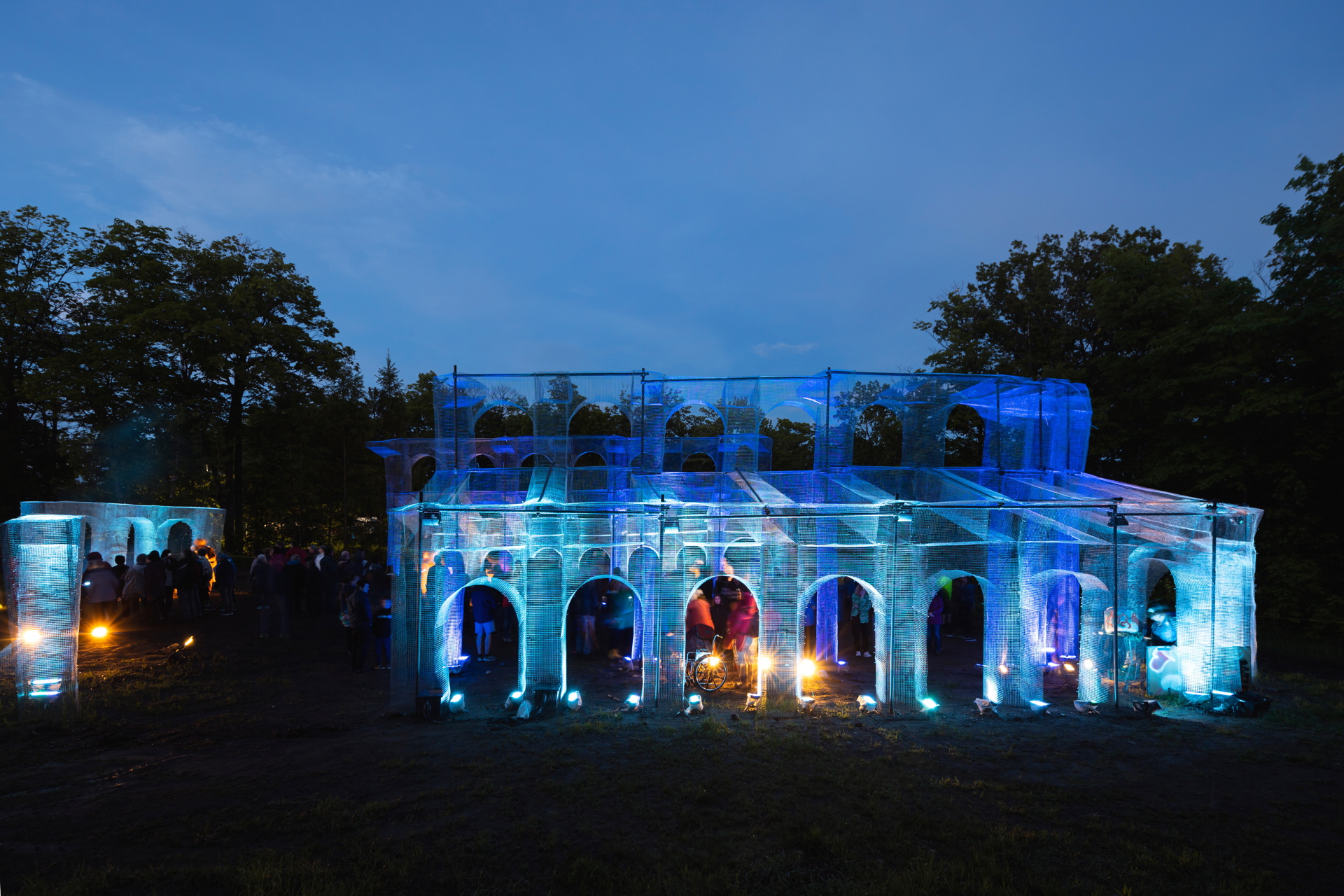 At Livegreenblog, we certainly have a soft spot for architectural installations that enrich the user experience. In this specific case, the theatrical experience, like the work Uprooting designed by the creator Lorraine Cote and architect Étienne Bernier from the Space Agency studio was an integral part of the International Theater Crossroads festival, held at Parc de Moulins, in Quebec, Canada.
The Windmills Park is the eastern part of the former Quebec Zoo. The site, which extends over nearly 30 hectares, mostly wooded, is characterized by winding paths and bodies of water. The park owes its name to the presence of seven mills, the remains of which are still visible along the Berger River.
An intriguing landscape context, also thanks to other pre-existing elements of the old zoo, such as an abandoned and dilapidated greenhouse that becomes the setting of the Uprooting installation, watered by the traveling theater event “Where do you go when you sleep while walking?” (Where you go when you walk in your sleep), an integral part of the festival for seven years.
The opportunity to discover not only the world of theatre, but also works of art covering different artistic disciplines, in this case those born of the collaboration between designer Lorraine Côté and Étienne Bernier, architect who founded the Agence Spatiale studio in 2011, an independent design firm based in Quebec that combines the spatial disciplines of architecture, art, interior design, urban design, brand design and furniture design. True to their motto “habits and design evolve, but memories remain”Déracinations, which means “uprooting” in English, also imprints itself in the memory of those who see the installation.
Already the name of the work represents a strong message at a time when many people are experiencing “uprooting”, because they are forced to leave their native land, not by choice, but by necessity, to earn a living, like the fur traders who once lived in this area or refugees who find themselves in unfamiliar environments in response to the climate crisis or wars. The concept is skillfully translated into a theatrical scenography, through a large, appropriately lit wire mesh structure. This ethereal volume, vaguely reminiscent of the interventions of Edoardo Tresoldi, is inspired by the old greenhouse, but also by the cages that once housed the animals of the zoo, also uprooted from their natural habitat.
As the actors progress, the mesh arches change appearance thanks to lighting effects/strong>. “Sometimes warm, sometimes cold, the luminous tones accentuate the sense of urgency or serenity felt during the performance, allowing the structure to evolve at the same pace”as Etienne Bernier explains.
The special quality of this great project also lies in the fact that it was entirely handmade, with low construction costs thanks to the use of modest materials that are easily recyclable and therefore intrinsically sustainable. Conceived as a scenography, the Uprooting Lorraine Côté and Étienne Bernier’s installation comes to life when illuminated and becomes the colossal backdrop for the theatrical performance. An ephemeral architecture, therefore without foundations in the ground, or “uprooted”, presented in harmony with its local context to improve the experience of visitors throughout the duration of the festival, which was held between May and June of this year.