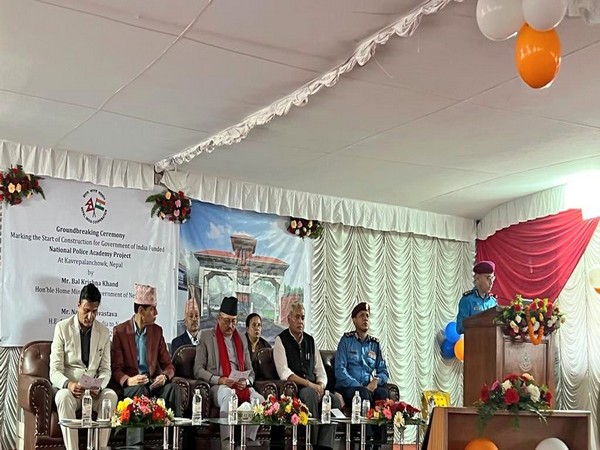 Kathmandu [Nepal]Sep 23 (NNA): Indian Ambassador to Nepal Naveen Srivastava and Nepalese Interior Minister Bal Krishna Khand on Friday jointly hosted a groundbreaking ceremony for the construction of the Nepal Police Academy in Kavrepalanchowk, Nepal.
The foundation stone for this project was laid by Prime Minister Narendra Modi and the late Prime Minister of Nepal Sushil Koirala during the former’s visit to Nepal in November 2014.
The project is being constructed under a grant from the Government of India at the cost of RNs. 1000 crore. The Nepal Police Academy project is one of the largest grant projects that the Indian government is undertaking in Nepal.
The event also coincides with [email protected] Azadi Ka Amrit Mahotsav” which celebrates 75 years of Indian independence.

“This academy campus will span an area of ​​approximately 84 acres of land with a total built-up area of ​​approximately 1.10 lacs m². The academy buildings will be a perfect blend of local architecture and modern technologies. It will also incorporate green building features, energy efficiency measures and sustainability standards. The infrastructure will be equipped with modern facilities and when completed, this facility will provide the Nepal Police with a state-of-the-art training in a fully developed campus,” the Indian Embassy said in a statement.
In his remarks at the event, the Ambassador of India expressed the hope that the NPA project implementation team will be able to complete the work on schedule with the cooperation and support of all.
He also assured the full support of the Indian government for the successful implementation of the prestigious project, another milestone in the close relations between India and Nepal.
Nepali Interior Minister Khand, in his address, thanked the Government of India for this project and India’s continued support within the framework of development partnership and bilateral cooperation.
India and Nepal have a multifaceted and multisectoral development partnership that reflects the closeness of the peoples of the two countries. The implementation of this project reflects the continued support of the Government of India to complement the efforts of the Government of Nepal. (ANI)