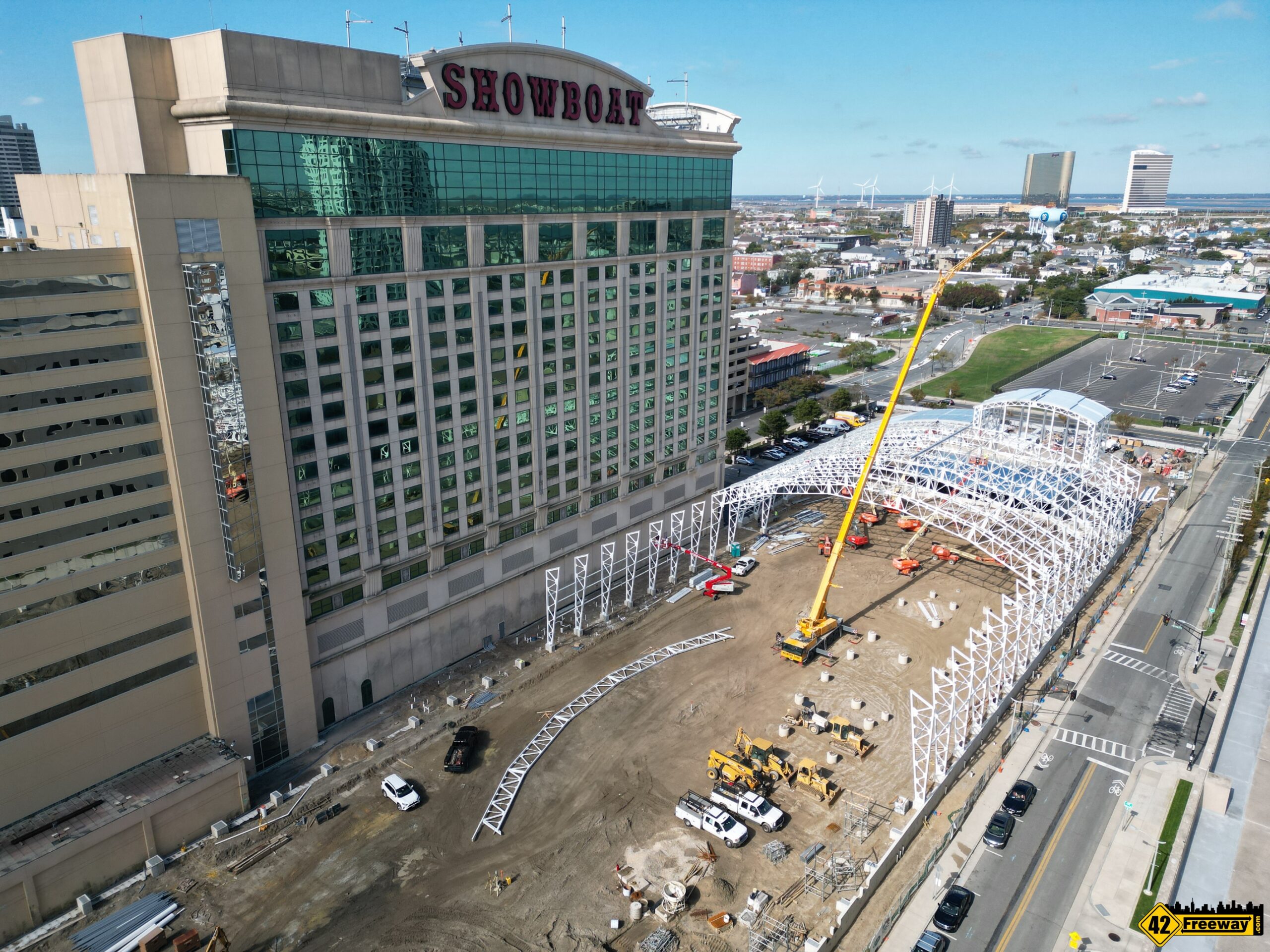 The Island Water Park at Showboat is a 100,000 square foot glass curved roof water park being built on the Showboat Hotel property in Atlantic City, and I stopped by Friday to check on the progress.

In this article I also cover the recently opened Luck Snake Arcade as well as upcoming plans to convert one of the Showboat towers into apartments!

With fun things to do in Atlantic City, lots of construction, and only about 40 minutes from Washington Township, 42Freeway will be stopping by Atlantic City and the county at least once a month to share all the latest on things under development or recently opened. .

This massive $100 million water park will have a retractable glass roof for year-round fun, including slides, pools, restaurants, bars and more!

The Showboat Hotel is owned by Philadelphia developer Bart Blatstein, which doubles as its family-friendly resort.

Showboat does not have a casino but functions as a hotel (and soon apartments too). They also operate the impressive Lucky Snake arcade, sports bar and indoor go-kart track.

Island Water Park’s original target opening was Memorial Day weekend 2023. I don’t have an update if that opening date is still scheduled, after 10 months of development.

Island Water Park is being developed right next to the Showboat Hotel in Atlantic City.

The property is a QUARTER MILE DEEP and the water park and associated entertainment areas will utilize the entire space!

The glass portion of the water park will be over 550 feet, with a slightly larger buffer zone for outdoor recreation on the boardwalk side.

The island’s water park will feature 11 different slides, including ‘parallel pursuit’ racing slides. On the tamer side, there will be a 10,300 square foot paddling pool and a lazy river.

The plans also include restaurants and bars as well as retail stores, lounges and party venues.

Family-friendly but targeting fun for all ages, the renderings developed by the architecture team also show areas inside the facility but away from the action, where adults can relax with a cool tropical drink… giving that full tropical experience. Even though it’s 22 degrees in Atlantic City!

They even show a recreated experience of walking through a small store, with a variety of food options, including Kohr’s pizza, burgers, fries, and ice cream. to have fun and play.

And how about a zipline through the facility? Well, according to some reports, it’s in the mix too!

Family fun has always been part of the Showboat experience, dating back to when it opened in 1987, having originally opened with a 60 lane bowling alley! A very unique thing for Atlantic City at the time.

In 2003, they enjoyed great success and a second hotel tower was added, that of Orleans and the House of Blues.

Despite being profitable, just 11 years later, in 2014, then-owner Caesars Entertainment put the casino up for sale… and with no online buyer, quickly shut it down.

The sale and closure was intended to bolster the other Caesars properties in Atlantic City.

In 2014, Stockton College purchased the property with the intention of making it an Atlantic City campus.

Facing legal issues with these plans, in 2016, Philadelphia-based developer Bart Blatstein and his Investments in the tower bought the property with the intention of reopening it.

Blatstein is credited with creating the beginning of the revival of the Northern Liberties/Fishtown area when he developed the Piazza project in the former Schmidt’s Brewery in Philadelphia. His Investments in the tower The site lists more than 25 major projects in the Delaware Valley.

In Atlantic City, Blatstein is allowed to apply for a casino license, but there’s an interesting twist in Showboat’s story.

When Caesars sold the property, they added a deed restriction that stated the buildings could not be used for a casino! Caesars did not want to add competition to the Atlantic City market.

But the undeveloped parking lot was fair game for a casino, and it was initially thought that Blatstein would develop a new casino on this part of the property.

Those plans then changed… with the development of Island Waterpark.

Currently, the Showboat includes the Grand Arcade and Lucky Snake Sports Bar, complete with indoor go-karts. The Island Waterpark will be a perfect accompaniment to that of the arcade.

It’s an innovative use of what used to be a large casino.

The arcade features all the latest interactive games, as well as a pinball area with the latest machines as well as retro machines.

The back section features an indoor electric kart track where the lights are dimmed a bit and the course is marked with neon lights.

The Lucky Snake Arcade is home to several restaurants and bars.

I imagine Island Water Park and Lucky Snake Arcade will have a connecting hallway, but I haven’t found any evidence of this yet.

With two large towers of hotel rooms, the idea of ​​apartments for some rooms has been floating around for years.

This week, on October 20, the Casino Redevelopment Authority will hear a presentation to transform the Tour d’Orléans (closest to the water park) into 312 studios!

The apartments are an approved use for the area.

QUATTRO – a staple of architectural staging