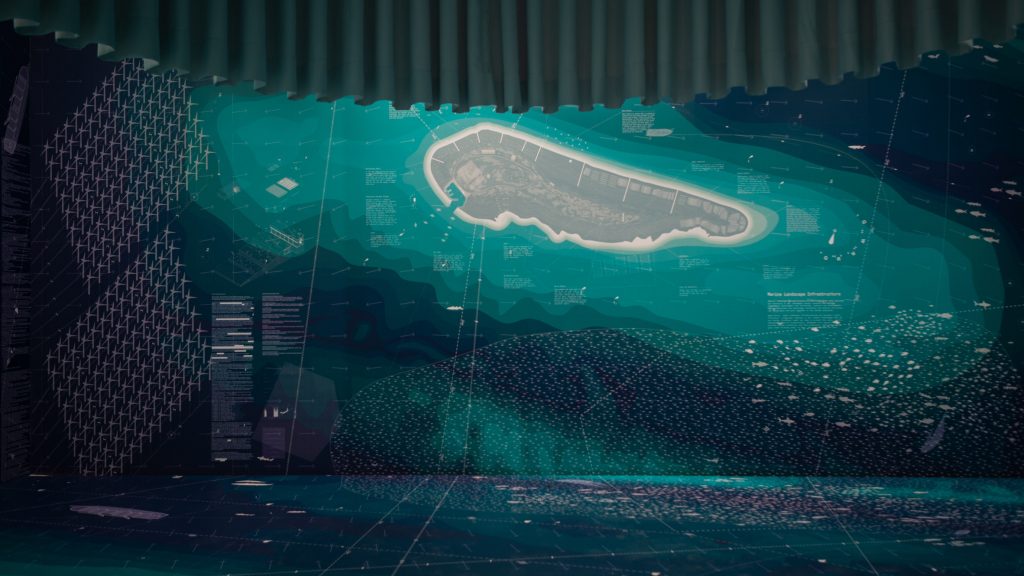 The Lisbon Architecture Triennale is back for its sixth edition, with exhibitions, installations and contributions from Dutch studio MVRDV and Japanese studio Tomoaki Uno Architects.

Entitled Terra, the Latin word for earth, this year’s Lisbon Architecture Triennale is a call to action centered on sustainability and striking a balance between communities, resources and processes.

The 14-week event was curated by Portuguese architects and educators Cristina Veríssimo and Diogo Burnay. It runs until December 5, 2022 and includes a number of exhibitions, book launches, conferences and events on the fringes of the city of Lisbon.

Each of the exhibits and events highlights climate change, human dependence on resources as well as social, economic and environmental injustices and how these issues are linked.

Read on for five key exhibits at the 2022 edition of the Lisbon Architecture Triennale:

Curated by Cityscapes Magazine co-founder Tau Tavengwa and anthropologist and writer Vyjayanthi Rao, Multiplicity is an exhibition that examines how architecture and design can better respond to global challenges such as inequality, climate change and conflict. .

The exhibition is held in several of the National Museum of Contemporary Art’s minimally decorated rooms, with books, posters and other exhibits arranged on folio cabinets and plywood tables to encourage visitors to engage with them.

It also includes case studies of architectural projects, such as Wiki House by Architecture 00, BookWorm pavilion by Nudes, and Plugin House by People’s Architecture Office, which highlight architectural and design initiatives and solutions to social and global.

Retroactive is an exhibition at the Lisbon Museum of Art, Architecture and Technology (MAAT), curated by the founders of design studio Taller Capital, Loreta Castro Reguera and José Pablo Ambrosi.

It calls for the repair of communities living in “vulnerable places due to overcrowding, lack of resources and basic service infrastructure” through the use of architectural initiatives.

“Retroactive explores the suturing tools of communities that urgently need architectural solutions that can reconcile their sense of belonging and their spatial dignity,” explained the organizers of the Lisbon Architecture Triennale.

At the Garagem Sul museum, Cycles focuses on the circular economy of materials, showcasing ways designers, architects and creatives can reuse waste. The exhibition was designed by local office Rar.Studio and curated by architect Pedro Ignacia Alonso with art curator Pamela Prado.

“Cycles addresses the role of architecture in the endless processes of transformation and redistribution of matter, and highlights the possible encounter between architecture and sustainability, economy, heritage and memory”, have declared the organizers of the Lisbon Architecture Triennial.

A focal point of the exhibition is Falca, a cork mound piled in the back corner of the gallery by artist Lara Almarcegui.

Visionaries is described by its curator Anastassia Smirnova as an “invitation to action”. It is organized within the Culturgest center through a collection of rooms, each of which illuminates radical ideas spanning different categories or themes.

Among the visionary projects is the proposal by Dutch architecture studio MVRDV to raise Eindhoven Cathedral by 55 meters to insert social and public functions below, alongside an exploration of the utopian city Auroville by French architect Roger Angel in India. Other contributors include Japanese studio Tomoaki Uno Architects, Spanish architect Andrés Jaque and Spanish firm Ensamble Studio.

“Their projects, more than just physical and spatial structures, are ambitious and controversial prescriptions for planetary strategies,” said the Lisbon Architecture Triennale.

“In many different forms, from bedroom scale to city models, these radical prototypes are likely to be productively interpreted, not just replicated, by future generations.”

Alongside the main exhibitions, a total of 16 projects were developed in response to the Terra Triennial theme. Twelve of them are on display at the event’s headquarters in Palacio Sinel de Cordes, while the other four are scattered around the city of Lisbon.

Among them is After Plastics, a project by KALA.studio that imagines a landscape where microplastics play a vital role in new plant growth. Meanwhile, designers Zhicheng Xu, Mengqi Moon He, Stratton Coffman, Calvin Zhong and Wuyahuang Li present Lodgers, a proposal for temporary housing for different life forms in Nevada, built from local materials.

The Lisbon Architecture Triennale takes place from October 1 to December 5, 2022 in Lisbon, Portugal. See Dezeen Events Guide for an up-to-date list of architecture and design events happening around the world.

The photography is by Sara Constança.

How BREEAM can help the construction industry achieve its sustainability goals