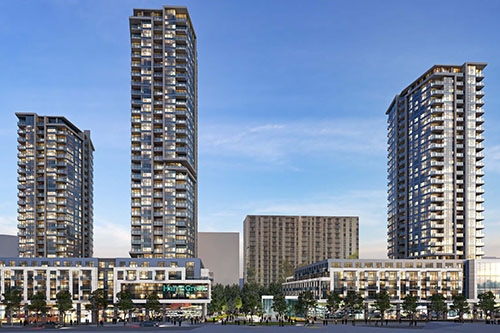 Losing a City, One Bad Building at a Time – Development and Architecture

Why don’t developers, on their own initiative and without civic coercion, offer the city beautiful buildings?

FRIEND DOUG CURRAN recently sent me a link to a promotional video from the mid-1950s (or whatever they called videos back then) highlighting GM’s new line of cars. Produced in Hollywood musical style, it featured a song and dance number:

Our dreams will come true.

We will make the world new.

The hopeful fusion of new car ownership and happiness is delivered without a shred of marketing cynicism, and what makes it breathtaking is not its mindless consumerism, but its optimism and its unbridled and genuine idealism, even: possibility itself – the “world made new” – as a declaration of hope pushed to the horizon; practically a guarantee of happy outcomes and a reason why that smile never leaves It was the promise – it seems to you that the promise itself was the emotional chassis of the company – that comes with every Chevy, as certain as the new car shines on the hood.

I swear you can’t watch the promo without being scratched by meaning, by a rush of longing for so much joy, for so much… revival.

The new car, of course, sat in the driveway of a suburban rancher. The whole thing was moving away from the miseries and frictions of city-dwelling and social (and racial) attrition and towards an unconstrained frontier, with no minus symbol at its bow. The entire painting was painted in shades of white. Dad was working. Mom cooked. Billy and Little Suzie did well. Everyone knew the rules. There was rules back then, not like the free-for-all today, damn it!

You can imagine the joys of something starring dynaflow“Buick, if I remember correctly.

This promise of 50s flow and future spanned just a heartbeat of history and, in footsteps and lurches too familiar and daunting to note here, deposited us in front of titles like this of October 5. New York Times: “‘Civil war’ talk erupts, sparked by search for Mar-a-Lago”:

“Polls and studies suggest that a growing number of Americans anticipate, even welcome, the possibility of sustained political violence.”

Elsewhere, the Time observes: “According to Gallup, 56% of Americans disapprove of the work President Biden is doing. About 80% say the country is on the wrong track.

It is not my purpose here to dwell on the United States of today or tomorrow, or even the lighter challenges and dangers here in Canada, but to make the connection between the social mood and cultural production and outcomes.

That is to say that hope is culture and finds its way not only into political and economic forms of social practice, but also finds unmistakable expression in the arts, and particularly in architecture and urban design. Literature, visual arts, dance are somewhat ephemeral; the buildings, however, tend to remain ostensibly, and long after, the social barometer has changed.

Let me give it all a local twist. There’s a column I wrote about how I wish Victoria Mayor Lisa Helps would have stood up in front of the property developers (with a loud echo of the architects) and said something like, “You want height and density? Then give the city distinctive and beautiful buildings.

There is a question lurking inside: why should the mayor have done it? Why don’t developers, on their own initiative and without civic coercion, offer the city beautiful buildings? Why is this not a reflex behavior? Leaving room for the possibility that most developers just have shitty taste, why aren’t they awash in idealism and ego: “I’m going to put together something so beautiful that it makes me proud and puts everything else in town to shame!” That sort of thing.

In practice, part of the answer is that there is no development school with compulsory courses in “building citizenship” – buildings as civic investment. Our society doesn’t ask developers or owners where we’re going or who we want to be (or it does, and the response is disappointing). How, for example, can each new building convey a quality of welcome? How, through our buildings, do we prolong social harmony and optimism? How can each new building give passers-by a sense of hope and well-being? Why doesn’t every new building say, “You’re home, you’re safe here”? These concerns are not really the abstractions that they seem. We all share pretty much the same visual instincts; and besides, Victoria is a city full of architectural critics.

The Jawls, in an extraordinary and enduring collaboration with architect Franc D’Ambrosio (Santiago Calatrava de Victoria), have, almost by reflex, created distinctive and superior buildings and former industrial communities throughout Victoria. Ditto Chris LeFevre (LeFevre and Company—Railyards, several Old Town redevelopments). Mosaic Properties partners Don Charity and Fraser McColl have added architectural value and beauty to every project they have undertaken. The list is longer than these few names, but they are the ones that stand out. Their vision for the project extends beyond the development pro forma and seems, in a way, to embody the understanding that each new building impacts – enriches or impoverishes – the history of this place, our history.

I have a mean, ungenerous theory about Victoria. The reason there’s so much back-puffing and enthusiastic noise around community instances is that there’s so little community here. Community is not simply contiguity or protection of way of life, but a larger shared purpose and action; sacrifice, sometimes. If there were more, there would be less applause. I don’t blame us locals; the common purpose suffers everywhere.

What is the most consistent response, as people comment on the emerging new identity of downtown? “Now Victoria looks like every other city.”

With this comment, no one yearns for the return of “a bit of old England”. Nobody asks that everything be half-timbered. No, what bothers people is a loss of character and uniqueness, and the loss of a connection between the person and the building.

I repeat that if developers cannot internalize these values ​​on their own, the City needs design guidelines that will do so for them. Believe me (and look around you): despite the municipal vanities, these do not currently exist.

Where could such directives come from? Where could the City find the principles, ideas, poetics, lexicon and phraseology of these brand new design controls?

Why look any further than the endless writings and presentations of locals like architect/planner Chris Gower and architectural historian Martin Segger, who (amongst others) have long advocated for quality, humanity and the originality of the built form.

They may never have been asked how you lose a city, but they would probably answer, “One bad building at a time.”

Gene Miller is currently writing Futurecide˛ a book that argues that disaster is ecological, present and edit the site Shit Sandwich: the Best of the Bad News, and launching the Center for the Design of the Future, a Victoria-based institution host for new answers to old questions.