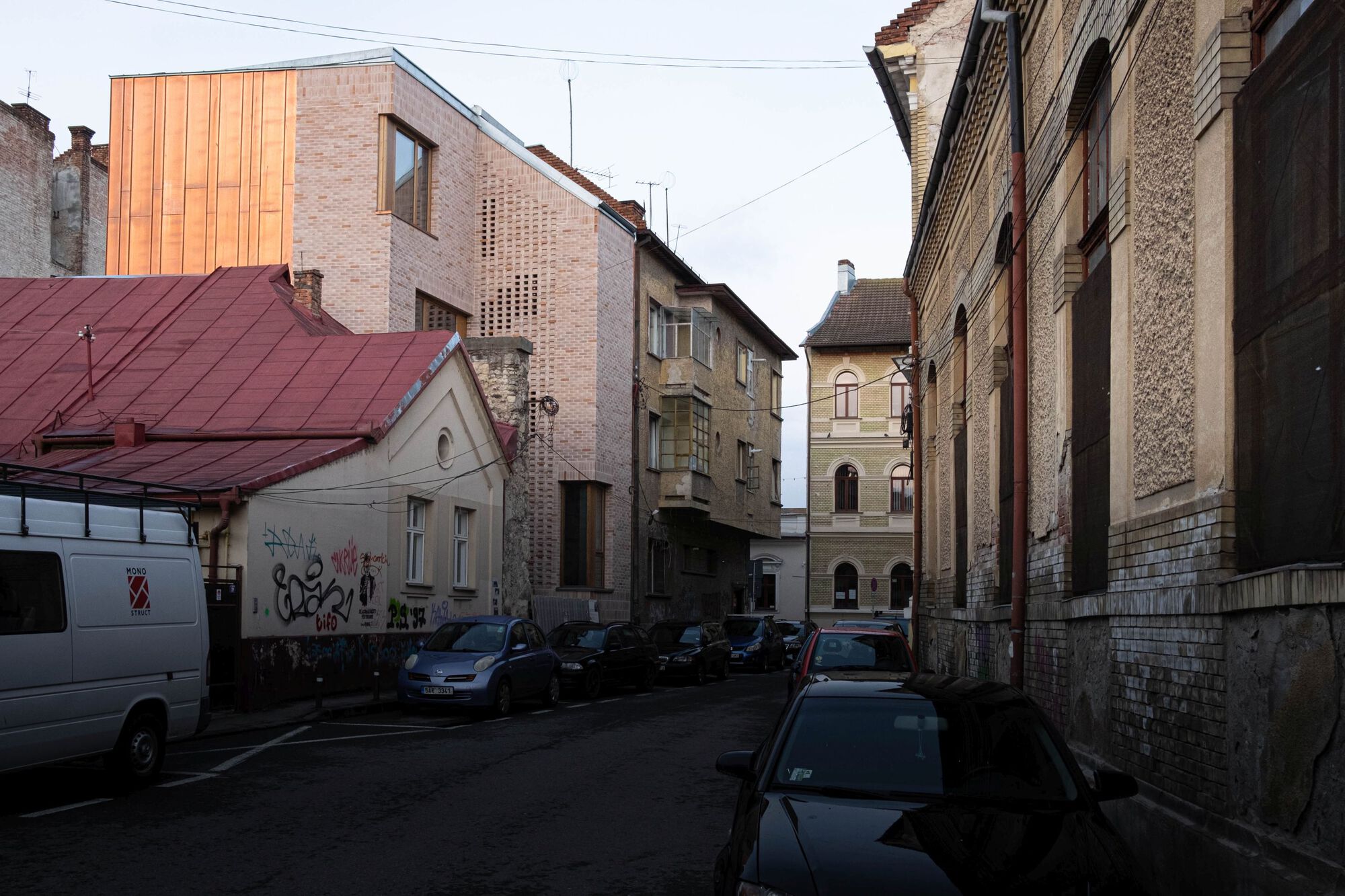 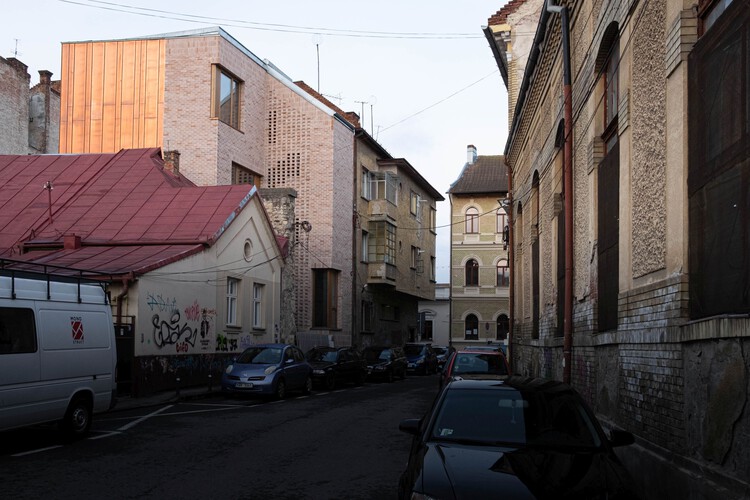 The corner on the edge: the offices of Tektum in Cluj. In the old town of Cluj, built on part of the medieval city wall, stood a house destined for demolition. It is this house that Tektum Architecture bought to build its own offices. Archaeologists from the city preservation committee demanded that the architect reveal and expose as much of the city wall as possible, as the basement of the wall was made of Roman stone blocks built 2000 years ago.

The plot presented challenges even without the city wall: building regulations required a continuous buildup on the 97 sqm plot. Continued accumulation would have concealed the excavated western part of the wall again. After lengthy discussions, the committee agreed to a waiver of the bylaw and allowed the building to be removed from the street line, revealing an approx. 6 m wall segment. This is how the inverted version of the old house was born: its courtyard was replaced by the new core, and the old house was replaced by a small decorative courtyard. The architect constructed a glass-walled corner between the sandstone boundary wall and the new reinforced concrete structure, which crossed the three lower levels, bringing natural light down to the basement.

The house needed to accommodate a growing team of six, with workspaces, a conference room, common/catering areas and all necessary service areas. The basement houses the common areas, a storage room, toilets, a bathroom with shower and the high and low voltage electrical control center. The ground floor houses the conference room, the first floor belongs to the main architect, the next two floors house two other offices and the second floor also houses a kitchenette. On the top floor, there are toilets and a ventilation center. All of these are located in the prism-shaped core replacing the original backyard. The eastern wall of the three lower levels is made up of the city wall.

The facade is defined by the narrow column of the staircase, which also provides a connection to the firewall of the adjoining Bauhaus-style house. The latter determined the level of the cornice of the new building, and the steps of its gable determined the slope of the roof of the staircase. The connection between the open stair courtyard and the small 12 m² west courtyard of the new building has a totally different feel. Tektum has decided not to turn its back on the neighbors, but to try to live with them. The western windows all face this courtyard, as well as the firewalls of the southern houses. This perspective defines the exterior materials used. The colored Doppel bricks were custom made in Germany. Their colors reflect the shades of neighboring firewalls. The roof was of notched zinc plates, the large window frames of burnt wood and the window sills of copper. The east elevation above the city wall as well as the west elevation are covered with notched copper plates.

The archaeologists have strictly demanded that the visible reinforced concrete structure in no way lean on the city wall, hence the large concrete consoles. One of these is the paneled canopy of the decorative courtyard as well as the floor of the next level. Everywhere we look we encounter visible surfaces: the unjointed bricks have not been plastered, only painted. The gray of the concrete blends nicely into the yellowish color of the sandstone, the spicy buttery color of the interior window frames, the slightly greenish dull gray of the floor, the dark brown of the wenge panels, the warmth of the oak furniture and the dark gray cold iron elements. Here and there, there is a more vivid color, but the overall effect is defined by the textures and the natural color of the materials.

The house was originally designed to NZEB standards, with sun and warming plans and an air recirculation system, underfloor heating and photovoltaic panels for exterior lighting, but the presence of the city ​​wall inside has overturned all calculations and models. Technically, the building cannot be completely sealed. Nevertheless, or perhaps because of it, the building is impressive, welcoming, welcoming, eye-drawing. It is at the same time a successful example of counter-urbanism, showing how a well-designed exceptional building can reinforce the rule.