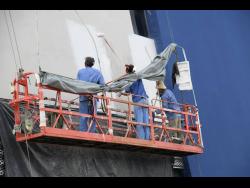 “…Among some of the organized methods used to control the world is the thing known and called ‘propaganda’…” said Marcus Mosiah Garvey, who would have turned 135 on August 17. Dr Lauren Marsh, in her Marcus Garvey Memorial 2022 Lecture at Liberty Hall, “Marcus Garvey and the Development of Trade Unions in Jamaica: Philosophy and Work”, pointed out that the history of trade unions in Jamaica tended to omit the crucial role played by Garvey. Also, there is no union for the construction industry because its practice is to hire construction workers on a contract basis.

Construction unions, globally, regulate members who adhere to quality workmanship, industry standards, construction specifications, etc., and also provide opportunities for continuing education and certification in the required skills. Its absence in Jamaica may help explain some of the manifestations within the construction development sector operating aggressively in the country with what are loosely referred to as “labourers/casual workers”. Could this add to the source of the developmental disease that has spread through several communities, particularly in the Kingston metropolitan area? Ask the growing number of people advocating through citizens’ associations under the ‘Community Advocacy Group’ and ‘Citizens’ Right to the City’.

I searched in vain for evidence of construction unions in developing countries. Carlos Lamarche in “Collective Bargaining in Developing Countries” suggests that there is a long tradition of determining wages and working conditions through sectoral collective agreements, however, limiting any single generalization, economic conditions vary considerably from one developing country to another. The International Labor Organization (ILO) in its report on “decent work”, emphasizes the issues of occupational safety and health (OSH) of industrial workers. For developing and transition countries, the ILO points out, many new investment decisions continue to ignore safety, health and environmental considerations.

In the absence of a construction union with principles to self-regulate, let’s ask ourselves some questions to diagnose any community spread of construction development disease. What governs and/or makes Jamaican casual workers accountable for quality delivery and job performance? Whose responsibility is it when casual workers repeatedly extend construction hours beyond regulatory stipulations? Who is responsible for the safety factors of workers, people and vehicles when roads are accidentally obstructed for long periods by equipment undertaking construction activities on public roads? Why should it be necessary to rehabilitate pavements after the occasional washout from cement trucks leaving chunks of concrete hardening on pavements and sidewalks? Should citizens and their parliamentarians constantly push to restore roads containing overflows from cement trucks and strewn with potholes from heavy vehicles, especially during hillside developments? How do communities manage sidewalks and stretches of roadway used for long periods for the storage of building materials, debris and equipment? It would therefore be incumbent on governmental regulatory entities to contain this disease.

Municipal corporations fall under the Department of Local Government and Rural Development whose minister, Desmond McKenzie, appeared to abrogate his responsibility during the 2022 parliamentary debates saying: “The local authority is unable to monitor these events” . Significantly, primary governance and operational responsibility for the built and natural environment rests with the Ministry of Economic Growth and Job Creation (MEGJC) led by the Prime Minister with critical portfolio areas: (1) land; (2) housing; (3) environment; (4) climate change; (5) water and sewage; (6) works. The MEGJC oversees 23 agencies, departments and divisions responsible for approximately 30 areas.

Development is a political term, says the University of London’s School of Oriental and African Studies (SOAS), used to reflect and justify a variety of different agendas, with a multitude of meanings. Pursuing this development is often seen as something that is done by one group to another and involves the natural environment. SOAS adds: “Development is about the conversion of natural resources into cultural resources…the environment is both a source and a sink in relation to economic processes: it is a source of raw materials and energy and a sink pollution.

Why are citizens being overwhelmed with other illnesses from the continued and prolonged pollution of the Rio Cobre while the MEGJC, through its National Environment and Planning Agency/Natural Resources Conservation Authority , has overall responsibility for enforcing the ‘Conservation of Natural Resources (Wastewater and Sludge)’ 2013 Regulations’? Its 2013 report reads: “Some wells in the Rio Cobre, Black River and Martha Brae basins have been abandoned due to pollution from commercial effluent discharged from alumina refining and rum distillery operations. . The severe pollution of Kingston Harbor is due in part to commercial effluent and sewage discharges from facilities in the Kingston Metropolitan Area (KMR) and the Rio Cobre Basin.

Kudos to the Prime Minister for visiting and reassuring families in downtown Kingston affected by the recent fires. The MEGJC, it seems, applies “urban renewal” loosely. the gleaner the August 12 editorial clarified this term.

However, why is Jamaica pushing for “renewal” when globally the international agenda of the UN’s “Sustainable Development Goals” and the “New Urban Agenda” of UN-Habitat appropriate “urban regeneration”? This includes the redevelopment of brownfields – areas that were previously used, now disused or abandoned land; densification – as contained in the NEPA Interim Development Ordinance of 2017; and densification – transforming areas into compact, higher-density areas centered around public transport. According to UN-Habitat, regeneration offers “diversification of economic activities, preservation and reuse of heritage, reactivation of public space and strengthening of service delivery”. Let us apply “urban regeneration”, especially in downtown Kingston, to curb the spread of development disease. A method was suggested by the gleaner editorial of August 22 to preserve stations. They are outstanding examples of the Jamaican vernacular style of architecture.

The community spread of developmental disease makes ‘tan a yu yaad’ unappealing to any Jamaican. The economyglobale.com The website reports that Jamaica ranks second on a list of 177 countries for “human drain and brain drain”.

Patricia Green, PhD, architect and registered ecologist, is an independent researcher and advocate for the built and natural environment. Send your comments to [email protected]

Start of construction of the El Corazon apartment complex