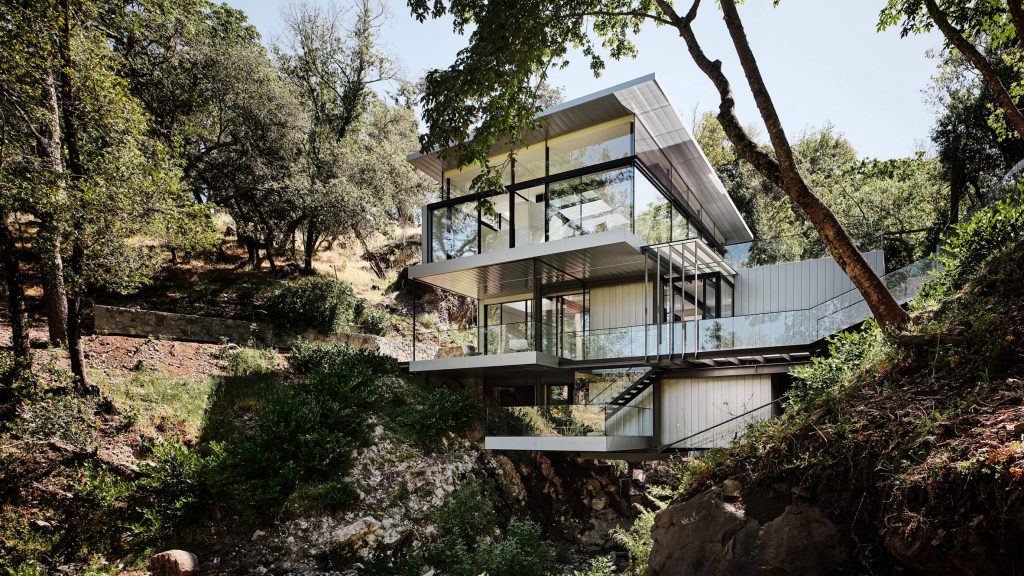 Zinc cladding and large expanses of glass characterize a vacation home spanning a creek that has been remodeled and extended by American studio Fougeron Architecture.

The Suspension House serves as weekend accommodation for a couple and their child. The project involved updating and expanding a 1970s two-story house located between two hills in an undisclosed location in California.

While designing the redesign, Fougeron Architecture of San Francisco set out to strengthen the home’s connection to the landscape and reduce its impact on the creek.

“A man-made object in nature can exist in harmony or disparity,” the studio said.

“The objective was to reconnect this structure to the environment while making the best use of the exceptional site for customers.”

In California, it is no longer legal to build homes that span a creek, and existing homes over creeks are subject to strict rules, which presented the architecture studio with significant challenges.

“There were strict guidelines on how to use the existing structure as a design basis,” the studio said. “Most importantly, the new house had to follow the exact outline of the existing house and terraces.”

In turn, the architects kept the footprint of the lower level and upper floor and added a third level which has a different orientation.

“The new third floor rotates 90 degrees to better relate to the site,” the team said.

“This change breaks up the mass of the structure, giving a bit of lightness and height while differentiating it from the lower floors.”

The previous structural columns that extended to the creek were removed and a new structural system was added to minimize disturbance to the creek, including the insertion of steel supports under the existing floors.

“The new structural system was anchored to bedrock in the hillsides, suspending the house completely above the water,” the team said.

Exterior walls feature zinc cladding, as well as large expanses of glass that open up sightlines.

Within the 2,500 square foot (232 square meter) accommodation, there is a division between public and private spaces.

The lower level contains a guest bedroom and utility space, while the middle level encompasses the common areas – a kitchen, dining room and living room. The top floor houses a master suite, a bedroom and a flexible room.

A black and white color scheme was used inside. The rooms have stone floors, contemporary décor and exposed columns and beams.

The levels are connected by interior and exterior stairs, and several glazed terraces are found on the perimeter.

The house has a thin, sloping roof that rises above the upper level and is topped with photovoltaic panels.

“The roof – like the house itself – hovers, creating a dynamic space with lots of natural light,” the team said.

The project also included the design and construction of a guest house close to the main house. The two-story dwelling features brownish zinc siding, a high clerestory and a pitched roof.

Fougeron Architecture was founded in 1985 by architect Anne Fougeron.

Other studio projects include a renovated San Francisco townhouse featuring a slanted glass facade and bright orange stairwell, as well as an urban residential building with faceted exterior walls covered in rods. grey.

Photography is by Joe Fletcher.