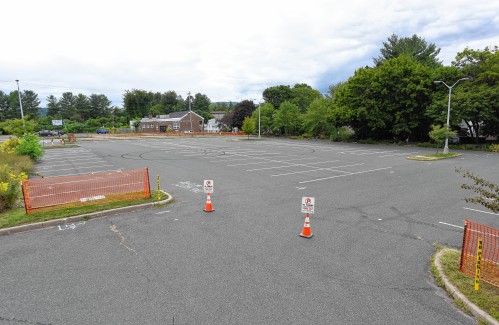 GREENFIELD – Just over a decade ago, even before the old skatepark closed, townspeople began engaging in conversations with local officials about their visions for a new one.

Those visions began to come to fruition Monday morning with the start of construction on a new skate park in the northern section of the municipal parking lot behind the old Wilson department store, between Davis and Chapman streets. Contractors began work by installing temporary fencing and erosion control materials.

The new structure will replace the former 17,000 square foot skate park on Olive Street, which was demolished in 2010.

“We’re super excited,” said Thomas Bullock, one of many local skaters who took part in the planning and fundraising efforts. “We have been waiting for this for a long time and we are very happy that it is finally here.”

Construction of the $980,000 skate park is expected to be completed by May 2023, according to director of recreation Christy Moore. Although costs have increased by approximately $200,000, the difference will be covered using $200,000 of American Rescue Plan Act (ARPA) funding.

In addition to ARPA funding, the park is supported by $350,000 in capital funds, $30,000 in community donations, and a $400,000 grant from the state Parkland Acquisitions and Renovations for Communities (PARC ).

Bullock, who skates in a gorilla costume every year in the Franklin County Fairgrounds Parade, said it has also become a hobby for her daughter. The family goes to the Turners Falls skate park, but it’s not always possible to get there. Otherwise, they skate in the street.

“She’s also on roller skates now,” Bullock said. “She tried to get support and publicize (the project).”

Another local skater, 12-year-old Johnny McIntyre, who has also attended many public meetings for the project, is eagerly awaiting a place closer to home where he can skate with his friends.

“I’m very excited,” said Johnny, who started skateboarding about a year ago. “I am delighted that it is very different from Turners. This adds more street skating and less green skating.

Barry Scott, who moved to Greenfield around 2013 when talks began, said he was thrilled to see the town finally build a new skatepark. He remembers working with Ben Miner and Brian Rodix on fundraising and raising awareness of the need for a new park. Last year, he also worked alongside Ben Goldsher, Al Goodwin, Jeremy Latch and Rodix to help plan a performance that took place in August at the Hawks & Reed Performing Arts Center.

“Every town has a baseball diamond, a basketball court…and given the popularity of skateboarding, biking, scootering, it’s time for every town to have a skatepark,” Scott commented.

Scott said he’s grateful not only to the “torchbearers” of the local effort, but also to Moore for including the opinions of the people who will ultimately use it.

“It’s such a niche thing,” Scott said. “It’s growing, but the specifications of how a park should be designed really need to be done by people who have been doing it for a long time. I’ve seen cities screw it up…so we’re grateful that Christy really heard us and let the real skaters and people who attended the meetings have a hand in the design.

Pillar Design Studios, which designed the skate park, has been involved in similar projects in Turners Falls, Springfield and Worcester, according to Brad Siedlecki, president of the landscape architecture firm. In April, Siedlecki shared a virtual rendering of the approximately 12,000 square foot skate park, which includes four entry points (three of which are handicapped accessible), a shade structure, benches, a charging station solar for electronics and water bottle refill stations. . In June, the project was approved by the Planning Council, on the condition that bike racks and pedestrian crossings would be added.

Now a resident of Turners Falls, Scott, who has been skating for about 25 years, said he looked forward to the end of the park.

“That’s the joy of having more parks popping up — unlike a baseball field, what you can do with it depends on how a park is designed,” he said. “Turners is so popular it gets crowded, and the Greenfield elements are going to be refreshing, so I’m looking forward to spending my time there.”

A leap towards eco-responsible architecture in Bangladesh