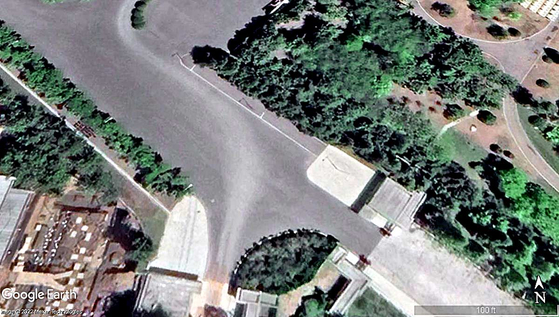 Traces of vehicles on a road outside the security compound inside a Pyongyang compound for the regime’s leadership can be seen in these Google Earth images from May 2022, which were analyzed by 38 North. [GOOGLE EARTH]

Satellite images of Pyongyang have raised speculation that North Korean leader Kim Jong-un would fortify his underground hideouts in the event of a South Korean or American attack.

The footage, which was analyzed by 38 North, shows vehicle tracks on a road in front of a security complex inside a residential and office complex in downtown Pyongyang that is believed to be above an underground complex of tunnels and roads.

According to 38 North, the distinct white vehicle tracks could represent a large amount of concrete excavation or demolition work.

The area has been described by former British Ambassador to North Korea John Everard and others as the modern equivalent of Beijing’s Forbidden City regime, with entry restricted to the Kim family and local members. the highest ranks of the regime.

Kim is believed to be moving around the compound surrounding the Workers’ Party Central Committee office building through the underground network to evade satellite recognition of his movements, according to 38 North and earlier intelligence reports.

According to 38 North, this project may be an expansion or upgrade of the underground network.

In May Google Earth images reviewed by 38 North, construction work was also underway at two other sites near the Workers’ Party Central Committee office building.

On a large piece of land about 188 meters (600 feet) south of the building, two excavators and two dump trucks can be seen, with earth excavated on the east side of this area.

In their analysis of the site, which shows the full exterior framing of four buildings and the construction of smaller structures, 38 North said it was “very likely” that the project was a large residence or banquet hall.

Satellite images from the same period reviewed by 38 North show that another banquet hall and support building between the chief’s headquarters and his official residence have been upgraded and renovated. But the presence of nearby construction equipment suggests that the building’s interior and finishes were not yet complete.

The ornate architecture of this banquet hall also raises the possibility that this structure could serve as an additional residence or guest house for foreign dignitaries. 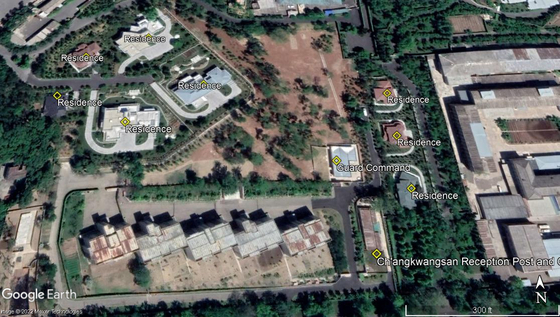 Luxury residences and a guard support building were built inside the Changkwangsan compound in the Forbidden City. [GOOGLE EARTH]

A comparison of Google Earth images taken between May 2021 and May 2022 shows that nine luxury residences and a guard support building have been built within the compound – their scale and surrounding lawns hinting at the members’ lavish lifestyles the highest in the country.

Art meets architecture: an exhibition in a redesigned hutong dwelling