“Innovation distinguishes between a leader and a follower.” Steve Jobs, founder of Apple.

This final column before the federal election focuses on innovation and manufacturing; two design initiatives at the heart of the Labor campaign that have received very little attention.

I want to illustrate their importance through two buildings for the very progressive company Kingspana story of innovation and initiative (and of a stupidity, for which we will have to wait until the end).

For a long time, we were inspired by the design of sustainable buildings in Europe and North America, where loose-fill insulation controls heat transfer by conduction and convection. But in the harsh Australian summer, reflective insulation from the sun is crucial for reducing radiant heat in roofs and walls – something most students miss unless you’ve been taught by a quality building physicist. like Alan Coldicutt, Jack Greenland or Steve King.

Hence my admiration for the Australian invention of AirCell by Brian Tikey in WA in 1998 – upgrading traditional aluminum foil insulation with a form of reflective “bubble wrap” so that it has both convective and radiant properties. The orange surface that reduces glare during installation is an organic layer that disappears over time to reveal the shiny surface below.

Through enduring discussions, I met Scott Gibson, Air-Cell MD, nearly 20 years ago when he was developing a thin “thermal insulation” that could serve as a “thermal break” in the growing use steel frame to replace (less-durable) timber frame. Called ‘Insulbreak’, it was part of the hit and was covered by Kingspan Insulationone of the big claws of the “Irish tiger” of the time.

In 2011 Kingspan commissioned a new office and warehouse in the Perth Industrial Estate in Malaga and Scott Gibson asked us for a design. The site was uninspiring: flat, treeless, west-facing with high voltage power lines. Working with Gibson, we designed a “big box” with a modest office building out front; highly insulated (as you would expect) with reduced, well-shaded glazing; Upward LED lighting and features bent AC conduit in Kingspan insulation. 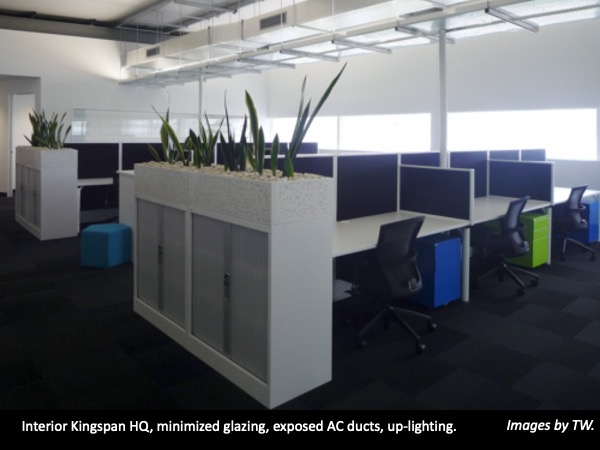 It has been so well received by staff that Gibson has reported that not only has it saved energy and water, but more importantly, the actual working hours of staff have increased and absenteeism and the churn rate decreased. All the characteristics of a “truly green” building.

Soon Kingspan wanted to build a local factory to make its insulation from ‘phenolic resin’, a strong insulation board that can be bonded to other materials such as fiber cement or plasterboard. The advanced manufacturing process developed by Kingspan was the best in the world; and at that time there were only two other facilities. A bold move by the company to manufacture in Australia to serve the Asian market, rather than the other way around.

When Scott Gibson asked my advice, I suggested that a project of this complexity and scale be handled by a large, entrepreneurial design firm, such as Jacobs, where my good friend Clinton Murray had just started as chief architect. They laid out a master plan and helped secure a site in the area being redeveloped around the closed Ford Motor plant. Sites in Somerton, on the outskirts of Melbourne, once made tyres, batteries, wiring harnesses, etc., all of which closed when Ford did. 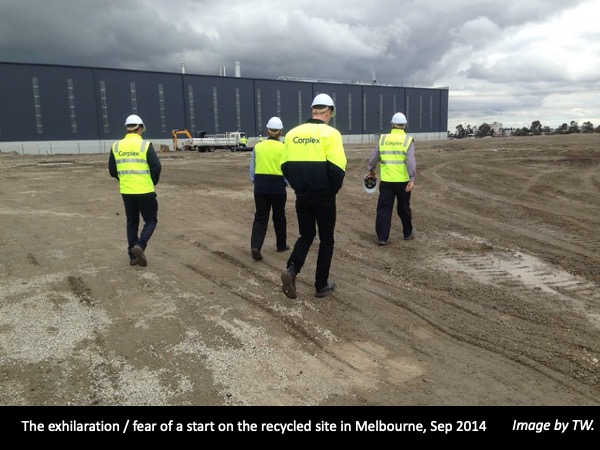 This was partly motivated by the possibility of funding by the Melbourne North Innovation and Investment Fund, or NMIIF, a $25 million fund set up in August 2013 by the Rudd Labor government ($15 million) and the Victorian Liberals of Dennis Napthine ($4.5 million) and Ford Australia ($5 million) , for projects that would generate substantial new jobs in the North Melbourne Region. Kingspan received $3 million for its manufacturing plant.

Once the approval of the Jacobs program was negotiated through the different levels of government, greater collaboration was needed. Building on this scale can be challenging, and Kingspan have contracted local Melbourne company Corplex, who are familiar with factories, to manage the construction and rental of the office/factory/warehouse. Corplex engaged their usual architects (Watson Young) to detail the construction documentation.

Since the product to be manufactured, insulation, is central to building sustainability, Gibson insisted on a “five-star Greenstar” building. We were recruited to advise on sustainability aspects and update design ideas and building details in Perth. To their credit, Corplex has hired a Greenstar Accredited Professional in-house to assist with their processes. 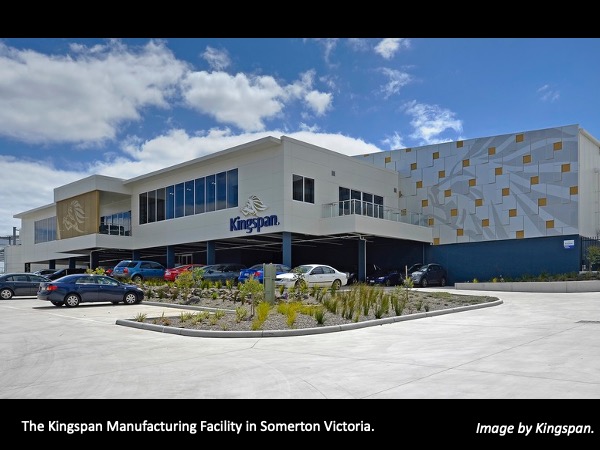 The factory required a long linear line, the warehouse a large box and the small office building facing south (thus a different glazing regime than Perth), all surrounded by a huge apron allowing trucks to deliver materials (somewhat volatile) and collect the product for Distribution. The roof is expansive, good for PV and water collection, and innovative Kingspan automatic skylights. 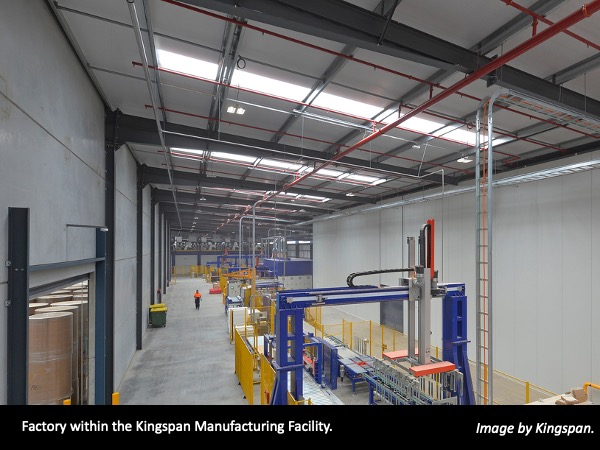 Organizing meetings and discussions for a building of this size is not easy. It is the hidden part of the architectural process, rarely discussed, but at the center of most of our professional lives. And that is before the desired sustainable creativity. 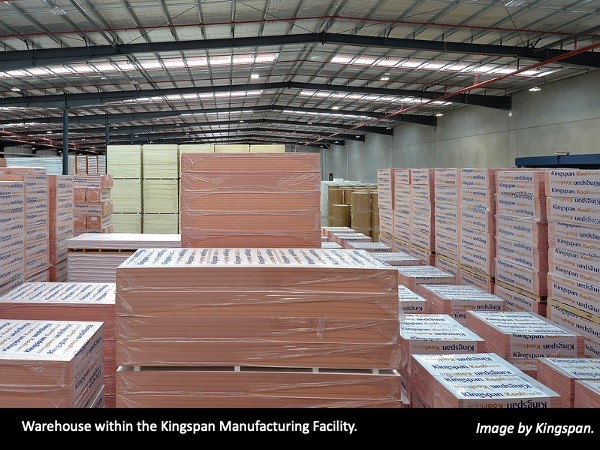 While Kingspan has its triple result, if the building is not profitable, the two-legged stool will crumble. The Greenstar process is difficult enough for typical buildings like offices, even more complex and opaque for a factory/warehouse. Despite our best efforts, accreditation for design and construction never came through, but Gibson still found the building to be both energy and money positive, as he tells A+D here. 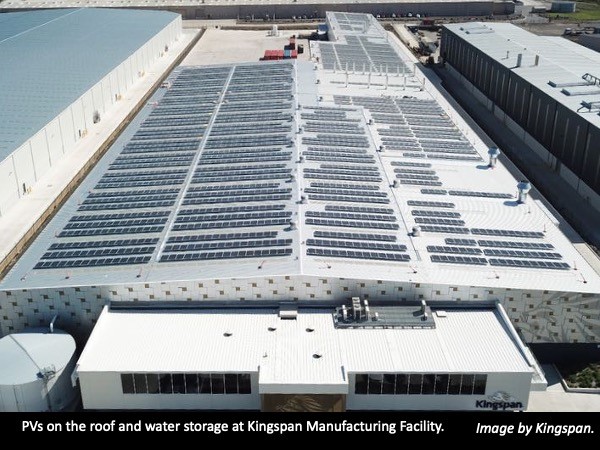 The care taken in its design and construction is finally justified: after two years of evaluation, the level of performance of the building is rewarded with ‘Six Star Greenstar’, the first factory/warehouse to achieve this higher level. An innovative company, employing more than a hundred people, manufacturing, selling and distributing an innovative material, in an innovative building.

But there is a downside, pointed out by then-Environment Minister Josh Frydenberg when asked to open the building. I was asked to show him and his amanuensis around. I’ve met many politicians during my time in Canberra and serving on government boards, but I’ve never met someone so boring and indifferent to innovation. But wait, it gets dumber. 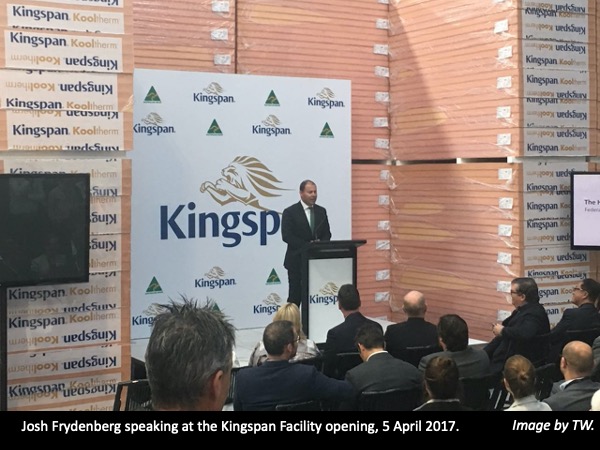 During a question-and-answer session, Frydenberg was asked if the federal government could offer assistance in enforcing quality and safety regulations for manufactured materials (given that there were few or no guarantees on inferior imports). He had just seen the factory and had had the importance of Codemark explained to him. Frydenberg’s response was “As a liberal, I’m always in favor of less regulation, not more.” A hundred pairs of slumped shoulders.

This misunderstanding of the importance of standards regulation persists. In Senate estimates last year, Senator Rex Patrick disparaged Kingspan’s products by asking questions that were apparently based on one of its foreign-made competitors. Kingspan is devoting ever more energy to combating this misinformation.

The only consolation is that in a week neither Frydenberg nor Patrick may have a position in our federal parliament. And Anthony Albonese, and his Minister for Industry and Innovation, Ed Husic, will embark on the revival of Australian industry.

Tone Wheeler is Principal Architect at Environa Studio, Adjunct Professor at UNSW and President of the Australian Architecture Association. The opinions expressed here are solely those of the author and are not owned or endorsed by A+D, the AAA, or UNSW. Tone does not read Instagram, Facebook, Twitter or Linked In. Sanity is preserved by only reading and responding to comments addressed to [email protected]