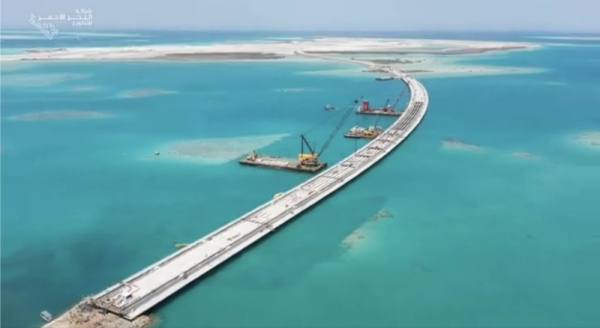 JEDDAH — The Red Sea Development Company (TRSDC) announced that it has completed the construction of the Shurayrah Bridge, the longest river bridge in Saudi Arabia.

The company said it celebrated the installation of the last block of concrete, weighing 400 tons, in the construction of the bridge which is an essential part of the infrastructure of the first phase of the Red Sea destination project, which is expected to be completed. . by the end of 2023.

The iconic 1.2 km bridge is part of the 3.3 km crossing between the mainland and the project’s main island, Shurayrah. The bridge will span a total of 1.2km across the Red Sea, with two small 36m sections at each end of the crossing to accommodate the movement of marine mammals.

According to an official source at TRSDC, the bridge was designed “in accordance with the highest standards of environmental commitment and sustainability, to be an architectural icon while protecting and preserving the environment during construction and operation of the bridge. “.

The source noted that the construction of the basic structure of the bridge has been completed and work is underway to asphalt the bridge, Asharq Al-Awsat newspaper reported.

The source said that the first phase of the Red Sea destination project marked a significant development with the completion of over 50% of its works, in addition to the full operation of many major assets, including a 4-star hotel. managed by TRSDC, and corporate offices at the Destination site, as well as the largest incubator in the Middle East. Work is progressing well to welcome customers by the end of the year, when the first hotels in the Destination will open.

The Shurayrah Bridge is one of the longest water bridges in Saudi Arabia, with a length of 3300 meters and a width of 28 meters. It contains two lanes for the passage of smart cars to and from the island and lanes for pedestrians and bicycles. The bridge represents the lifeline of the island as it is the main access point to Shurayrah Island and connects the island to the mainland.

The Shurayrah Bridge consists of more than 600 precast concrete blocks and their weight varies from 80 to 400 tons. Its design and construction methods met TRSDC’s strict sustainability criteria. Sustainable measures include strict controls on preventing any movement of sediment from stockpiling activities with several monitoring buoys strategically located to alert any breakthrough of surface dams. A precast yard for the bridge sections was established near the coast to minimize travel distances with concrete sourced from on-site concrete plants.

The ARCHIRODON Group, a world leader in infrastructure projects and maritime works, wanted to achieve sustainability in the construction process of the longest river bridge in Saudi Arabia, by implementing environmental impact assessment studies deck to ensure that the marine environment is preserved. More than 90 percent of the concrete used was environmentally friendly, precast, instead of conventional concrete to ensure that no leaks or environmental issues occurred at the bridge site.

The source pointed out that the construction operations have taken into consideration the preservation of the local plants present at the site of the bridge, such as the mangroves, which have been invoked as part of the aesthetic aspect of the design of the bridge, and that TRSDC seeks to enhance and preserve.

Shurayrah Island is one of 22 islands in an archipelago of over 90 selected for development. The spectacular Coral Bloom design concept for Shurayrah was created by renowned British architects Foster + Partners.

It is heavily influenced by the island’s natural landscape, with hotels nestled amongst the dunes and biodiversity taking center stage.

The Red Sea Project is a luxury tourist destination that will set new standards for sustainable development and position Saudi Arabia on the world tourism map. The project will be developed over 28,000 km2 of pristine lands and waters along the west coast of Saudi Arabia and includes a vast archipelago of over 90 islands.

When completed in 2030, the Red Sea project will include 50 hotels, offering up to 8,000 hotel rooms and approximately 1,300 residential properties across 22 islands and six inland locations. The destination will also include a luxury marina, entertainment and leisure facilities.

Make an impressive style statement with your exterior cladding design