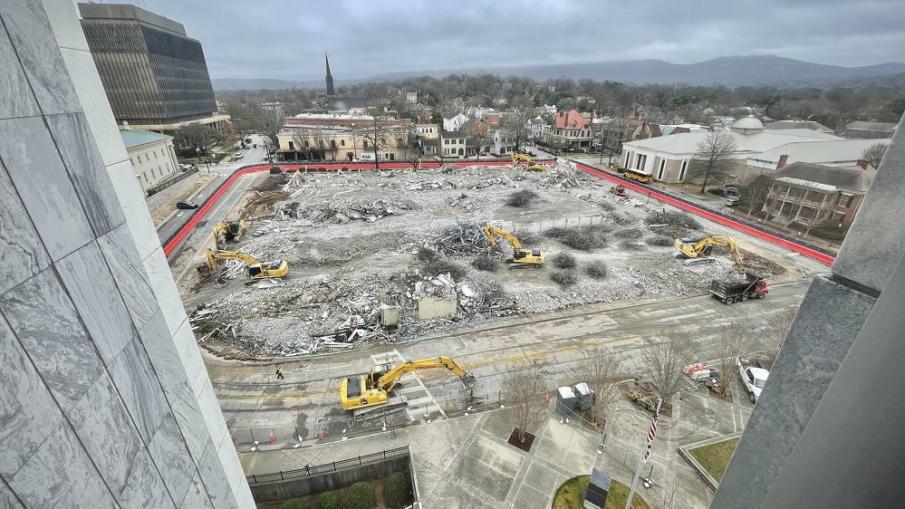 Demolition of the previous structure began in January and was completed within a month. (photo by the town of Huntsville)

After already reaching a major construction milestone, crews in Madison County, Alabama continue to make progress on the site of the future Huntsville City Hall.

Workers have completed the demolition of a pre-engineered parking deck to make way for $90 million, 176,000 square feet. municipal complex that will more than double the size of the existing structure.

“Renovation and expansion of the existing building is not feasible,” said John Hamilton, city administrator. “The new City Hall will allow us to bring together in a single building the different services that are currently housed in several different buildings in the city center. It allows us to co-locate the services that must be able to work together on a routine basis and to consolidate customer service areas used by our fellow citizens.

“It will also include space to accommodate future growth and reduce maintenance and operating expenses associated with multiple aging buildings and leases. We are delighted that such a good site is available in the historic heart of the city. 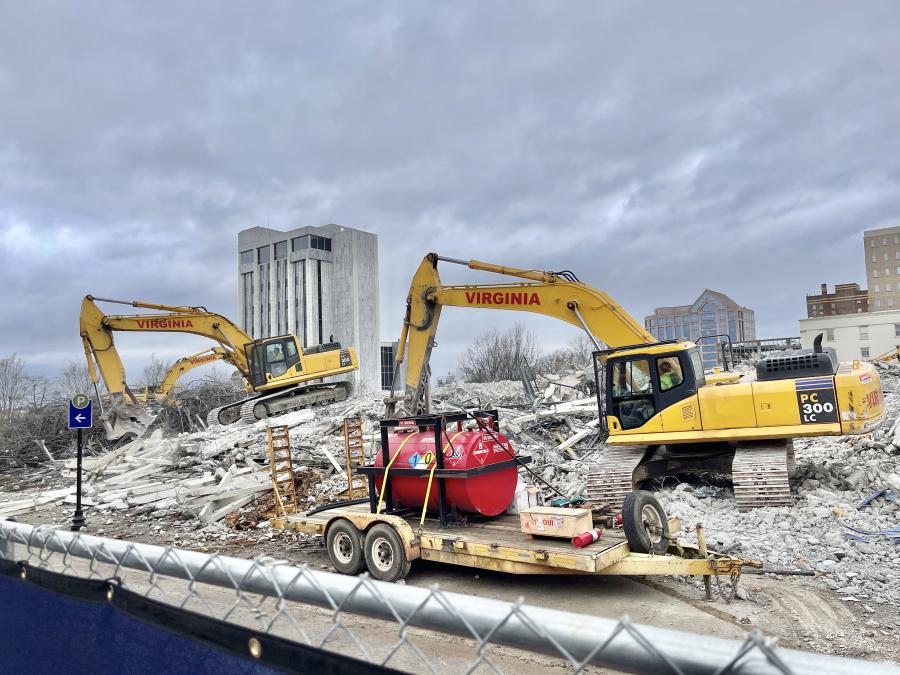 Hamilton said the design allows managers to modernize the approach to meeting employees’ workspace and collaboration needs and includes features to better serve the public.

“We are at a point in the growth of our city and the city staff that remain in our current buildings is simply not sustainable. Fortunately, we have been able to position ourselves fiscally so that it is a very affordable project and we are ready to make these improvements.”

The seven-story, 195,000 square foot building. parking lot are being built in front of the current City Hall on Fountain Circle. Construction began in February 2022 and is expected to be completed in 2024.

“The design team, led by Goodwyn Mills Cawood (GMC) and Turner Construction, has tremendous experience building large facilities like this,” Hamilton said. “They have an impeccable track record, and we have been very pleased with their efforts to date.”

GMC is the architect, interior design, civil engineer and landscape architect for the project, while Turner Construction is the general contractor. According to Turner Project Manager, Brandon Tucker, “Construction is progressing well. The project is progressing according to plan, with more and more subcontractors engaged in the work every day. We are absolutely delighted to build this important structure at the heart downtown that we’ve called home for so long.”

Demolition of the previous structure began in January and was completed within a month.

“With the location, all eyes were on the demonstration, and it certainly provided plenty of entertainment for nearby businesses and downtown customers,” Tucker said. “To prepare the area, we worked with the city to ensure a safe perimeter and plenty of signage. No explosives were used during the demolition phase. We used remote monitoring and reporting seismographs to ensure that the surrounding historic buildings were unaffected by the work.”

Tucker noted that the project is extremely important to his team.

“This is not just a milestone, but a vital project for the City of Huntsville. Now the largest city in Alabama, Huntsville is making significant strides to keep up with the region’s growth. This structure will serve them for decades. To Turner, the integrity and quality of the work we do is important now and for the future. Our primary concerns are ensuring communication with the public about changes and impacts on the downtown core. .

Tucker explained that carrying out construction work in a busy area is one of the challenges for crews.

“We are working hard to educate all people, partners, contractors and guests accessing the site on what is necessary to keep everyone safe. Additionally, anytime you have a job site in the middle of a crowded area, precautions should include keeping surrounding structures, businesses and people safe. This is factored into every decision we make.”

Currently, mass foundation works are underway, along with the construction of retaining walls and the management of underground utility supplies. Excavation and deep foundations have already taken place.

Equipment used on site includes a tower crane, support cranes and hydraulic excavators. Key materials include cast-in-place concrete construction with a pre-cast exterior and curtain wall/storefront. Interiors will be constructed with durable finishes to support a long-term building lifecycle.

“We have worked with the city to gather feedback from community members on the project through public comment sessions, in addition to discussing it at several city council and planning commission meetings to ensure that the community had the opportunity to provide feedback. It will be a one-stop shop for construction, planning and business, and will bring together all city departments to foster collaboration, increase efficiency and improve the work environment. For citizens, it will greatly facilitate access to these services, by bringing them all together in the same building.

Coyle said the building was designed to be architecturally sensitive to the existing downtown structures and landscape. 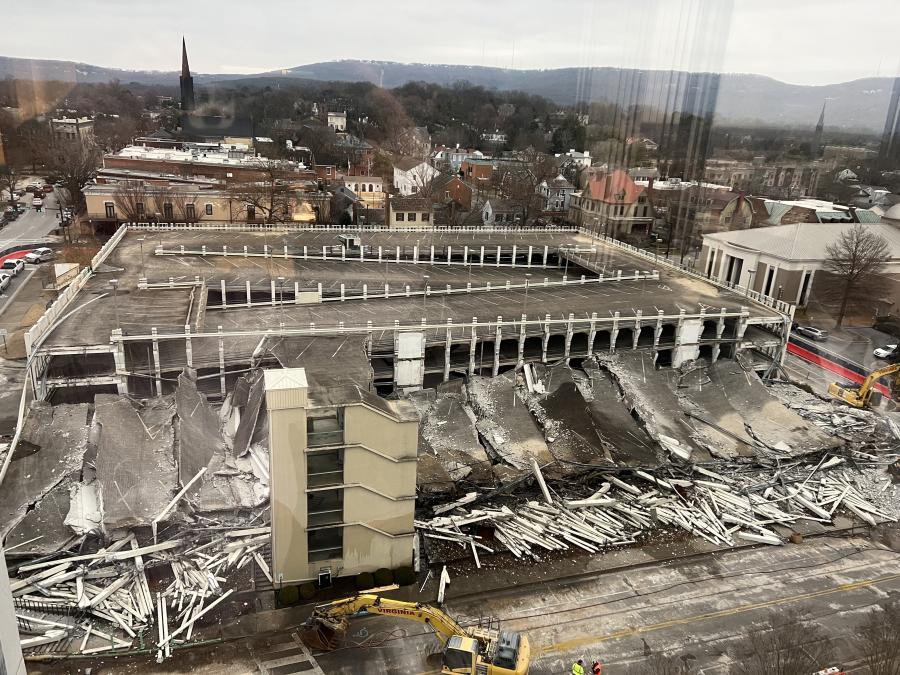 “The exterior will be a pre-cast veneer designed to look like limestone, but will be cheaper and more durable over time. The overall look of the building has been influenced by the adjacent architecture. It will incorporate lots of glass to allow for natural light to flood in, as well as two entrances that facilitate and facilitate access to City Hall for staff and the public.

Ornamental touches will be limited to public areas such as a common area on the second floor, meeting rooms and public meeting rooms on the sixth floor.

“As you move into the department offices, the overall finish is much more utilitarian and easier to maintain. Most floors in public areas will be terrazzo, similar to what is in existing City Hall Carpeting will be installed in spaces that require better acoustics The building and parking garage will fill the block, but will include sidewalks and landscaping to meet streetscape design standards used throughout the city center.

Says Coyle, “We believe this will be a legacy building that will serve the town of Huntsville for decades to come.”

Once the new complex is completed, plans are to demolish the existing town hall building and use the area to create more public green space. CEG