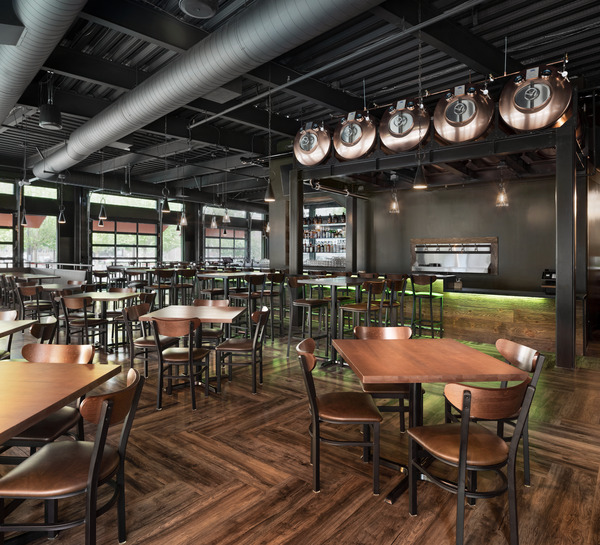 The new 7,353 square foot interior renovation includes a brasserie, restaurant and commercial kitchen. The decor of the space pays homage to the region with salvaged Douglas fir wood from historic buildings, such as a University of Washington police station and a covered bridge in Sweet Home, Oregon. The art gallery pays homage to the brewery’s history through historic photos of beer drinkers from the late 19th century.

In the layout, Ware Malcomb designed open and private spaces and redesigned a mezzanine to be invisible to visitors, as a means of egress. Ware Malcomb worked with a brewing consultant to create brewing facilities on approximately 3,300 square feet. assigned to production. Another special feature are the gender-neutral restrooms designed with eight toilets and a sink with backlit mirrors that are transparent to the new brewing production space. “The Bellevue Brewery occupies a prestigious and historic position as Bellevue’s premier craft brewery. We worked closely with their team to revamp the interior design to match the reputation of the brewery,” said Cindy Kang, Director, Interior Architecture and Design for Ware Malcomb. “It is a destination place and visitors can take full advantage of it.” For decades since its inception, the craft beer scene has bypassed Bellevue. It wasn’t until the Bellevue Brewing Company served its first batch of beer, on December 12, 2012, that Bellevue got its first local craft brewery. The brewery has attracted a large number of local and regional followers. He eventually became the obvious candidate to move operations to the city’s booming Spring District. Construction of the district began in 2013, with the brewery planned as the heart and soul of the new urban village. Beyond its state-of-the-art production brewery, Bellevue Brewery’s dining room serves beer from 10 1,000-litre copper tanks, suspended above the bar. It makes and serves beers and lagers in a large family dining room and, in addition to craft beer, offers a great selection of North West wines in partnership with the EFESTE winery, regional hard ciders, an experience full-service culinary, a full-service licensed cocktail bar and a 2,500 square foot beer garden overlooking a park. SmartCap Construction was the general contractor for the project.