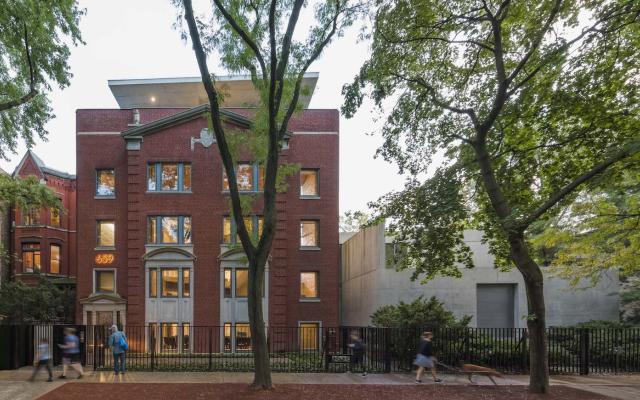 Now known as Wrightwood 659, this addition to Chicago’s cultural scene opened inauspiciously in 2018. The meticulously preserved exterior only hints at the dramatic renovation that can only be seen from the inside. outdoors at night, through lighted windows. Interior concrete surfaces are dried and polished, accented with stainless steel and glass. In addition to large, multi-storey open spaces suitable for events, monumental sculpture and exhibitions, the building includes several galleries of white cubes with track lighting for more traditional forms of contemporary art. Wrightwood’s inaugural exhibition 659 featured the architectural work of Ando and Le Corbusier.

Between the Eychaner/Lee Private Home and the opening of Wrightwood 659, Ando has designed over fifty-six major projects, eight of which are located in the United States. Completed in 2001, the Pulitzer Arts Foundation in St. Louis, Missouri was his first design for a public building in the United States. It features Ando’s signature enigmatic concrete exterior walls. Theses were poured on the site over a nearly four-year construction period using methods not typical of American architecture of the time.

A review in Architecture Week described it as “both a serene setting for the contemplation of art and a contribution to the revitalization of the urban landscape of historic Saint-Louis”.

No-code architecture, speed and the art of the possible

VIDEO | On a note of history

How to Bring Lumion Architectural Designs to Life